As near as I can tell, I have reviewed the Chatham Community Players’ biannual musical version of A Christmas Carol since 1996 a total of 11 times, having missed the virtual version the troupe produced during the pandemic in 2020.

Over the years, not much has changed: different casts and costume details are about it. So, what was there about this year’s production that would make it memorable and worth revisiting?

The lovely melodies and costumes, the ghostly appearances stay pretty much the same, as does the high level of talent attracted to audition for this show. Regarding the cast, Ed Faver has replaced the late Alan Semok, who played the role of Scrooge 21 times and passed away in October 2019, and David Romankow has replaced Steve Stubelt as Charles Dickens, a role Stubelt played for a long time, too (Right: Romankow and Faver). And Director Susie Speidel has cast five small children in roles that, in the past, had been played by 12–16-year-olds, upping the “aww” factor and rendering the degree of suffering endured by young children even more poignant and urgent. Yes, the main themes of A Christmas Carol speak to 21st century American audiences loud and clear.

The play’s original music and “book,” adapted from the writings and letters of Charles Dickens by Philip William McKinley, retells the classic story of the miserly, miserable Ebenezer Scrooge, who is redeemed on Christmas Day, while interweaving details from Dickens’s life, childhood and family with the events depicted in the narrative. Taking the old geezer on his "journey" to redemption are three ghosts: Christmas Past, Christmas Present and Christmas Future. All serve to overcome Scrooge's disregard for his fellow men and soften the hard, constricted heart of a man reputed to be the "public face for a good man of business"—a message as relevant today as when Dickens penned it at the height of the Industrial Revolution in 1834.

Faver (left) might not be as snarly as Semok, but he ably conveys the close-minded penury of Scrooge as he grimaces and frowns; he’s so disagreeable that his conversion at the end is all the sweeter. He’s especially nasty as he contemplates “The Jingle of Money” in his strongbox, fingering the coins and letting them drop just to hear the lovely sound; shouts, “Bah! Humbug!” to his delightfully chipper and kind nephew Fred; and dismisses pleas for a donation to help poor children by exclaiming, “Are there no prisons? Are there no workhouses?” as he literally throws the solicitors out of his office with a roar. Faver is especially good at revealing the slow opening of Scrooge’s heart and softening our hearts toward a real dramatic villain.

David Romankow is equally as terrific as the avuncular Charles Dickens, who interjects comments and helps guide Scrooge through his past, present and future. Dignified, personable, nonjudgmental (he lets Scrooge show his nastiness without commenting on it), he often joins other characters, lending his beautiful voice to their musical numbers.

Other standouts in the cast of 19 include Peter Corley Scrooge’s nephew Fred, who toasts his niggardly uncle despite the old man’s cruel treatment of the young man. Rachelle Rennagel sings Mrs. Cratchit’s sad song to a deceased Tiny Tim, “If I Could Hold You in My Arms,” in beautiful voice, and Missy Renwick is a delight as Fred’s wife and heartbreaking as Scrooge’s scorned fiancée Belle.

And as Scrooge’s clerk Bob Cratchit, Nick Foil (left, with Leo Caravano) sports a convincing Cockney accent as he sings and dances superbly. Rounding out the adults are Tracey Lynne Haskell as an ebullient Mrs. Fezziwig exhorting her party guests to “Dance with Your Dumpling” and as the Charwoman who steals Scrooge’s bed curtains, rings and all, after he’s dead. The talented David Simon is equally as terrific in multiple roles, especially Mr. Fezziwig, the grasping Pawnbroker and most significantly as the Ghost of Christmas Present, wearing a curly red beard and navigating the stage on stilts as he sings beautifully. And Lisa Barnett’s Laundress, pawning the dead Scrooge’s blankets, is appropriately grasping and unremorseful; she really adds to the very funny “Pawnbroker’s Song,” with its refrain, “Cheerio, ta-ta,” and its nifty choreography. 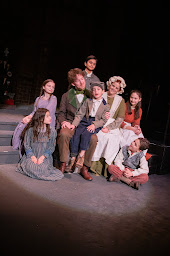 But in this year’s version, it’s the kids who steal the show; even if, at times, we couldn’t hear them very well, their adorable vulnerability is on full display. Plus, they can act and sing! Leo Caravano (the Boy Scrooge and Tiny Tim) is heartbreaking when he recounts “Tiny Tim’s Dream.” Marin Wilson is a touching Fan, Scrooge’s sister, and later, Harriet Cratchit; siblings Lucas and Emma Stoicescu provide ample support as Frederick and Belinda Cratchit, respectively; and Jules Baker and Ajay Tolia round out the Cratchit family as Martha, the elder daughter, and Frederick, the elder son, respectively. As you can see by actors playing multiple, often minor, roles, this is an ensemble show; they are a tight group with nary a weak performance among them.

Wigs assembled by Kenya Kruse and costumes designed by Fran Harrison—complete with bonnets and muffs, cravats and top hats, petticoats and hooped skirts, and scarves galore—transport us back to the nineteenth century. And the three Ghosts (two on stilts) move the story along with some special effects that were unexpected and a bit scary—although not too scary to frighten the younger audience members! Under Susie Speidel’s masterful direction the action moves smoothly around the small playing space, with even the shallow stage doing quadruple duty as a London street, Scrooge’s bedroom, a warehouse and a drawing room. Musical director Jake Cannon and his orchestra offer marvelous accompaniment to the music and lyrics by Philip William McKinley and Suzanne Buhrer. Roy Pancirov’s set design (painted by Dean Sickler) evokes mid-nineteenth century London, Ed Whitman’s lighting adds atmosphere and Carol Petersen Snow’s props and set decoration really give a sense of time and place. Joe DeVico’s sound design makes sure that the orchestra doesn’t drown out the actors’ voices as they sing.

There’s nothing Scrooge-ish about this wonderful production at the Chatham Playhouse. Despite its scarier aspects—most notably the appearance of ghostly spirits and the projected death of Tiny Tim—A Christmas Carol is great family entertainment.  And although the story seems to have little to do with the original Christmas, its twin themes of redemption and hope are most appropriate to the holiday season—whatever your religious persuasion might be. The troupe pulls out all the stops for A Christmas Carol, artistically and creatively, to give us a real holiday treat. So, if you’ve never seen this show—and even if you’ve gone numerous times—call the box office for tickets before they’re sold out! (left: Ed Faver and David Simon as Scrooge and the ghost of Marley)

A Christmas Carol will be performed Tuesday through Saturday evenings at 8 p.m., Saturday and Sunday afternoons December 17 and 18, at 3 p.m. through December 21, at the Chatham Playhouse, 23 N. Passaic Ave., Chatham. For information and tickets call the box office at (973) 635-7363 or visit the website at www.chathamplayers.org