The Shakespearean comedy, Twelfth Night, or What You Will, currently gracing the Shakespeare Theatre of New Jersey’s Main Stage is an appropriate conclusion of the troupe’s 60th anniversary season and the perfect antidote to holiday chaos and post-pandemic melancholy.

The most popular and most frequently performed of the Bard’s romantic comedies, Twelfth Night was commissioned in 1601 by a guild of lawyers to celebrate the Feast of the Epiphany—the Twelfth Night of Christmas—hence, the play’s name. It is a fast-paced story filled with love, illusions, music, beautiful verse and pranks set in the mythical kingdom of Illyria where resides a lovesick duke, Orsino, who pines for the rich noblewoman Olivia, who spurns his attentions, having foresworn men to mourn her late brother for seven years. 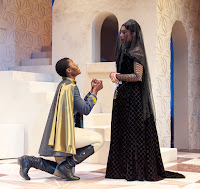 Into this milieu is, literally, thrown the maiden Viola, washed ashore during a storm that wrecked her ship and drowned, she thinks, her identical twin brother Sebastian. As an unattended maiden, she would be in great danger in a foreign land, so disguised as a eunuch, she enters the court of Orsino, who sends her to woo Olivia for him. When Olivia falls in love with Viola—renamed Cesario—who has herself fallen in love with Orsino (left), chaos ensues, only to be further confused by the appearance on the scene of Sebastian, who has not perished in the shipwreck at all!
And, as if this does not sow enough confusion, add to this zaniness Olivia’s drunken relative Sir Toby Belch’s attempt to marry her off to the buffoonish knight Sir Andrew Aguecheek, while helping himself to the poor fellow’s money. These two, along with the saucy maid Maria and the disgruntled servant Fabian, pull off a practical joke on Olivia’s puritanical, stern steward, Malvolio, convincing him that his mistress is in love with him and, through a forged letter from her, instructing him to dress and behave in an outrageous manner, much to their great hilarity and ours. 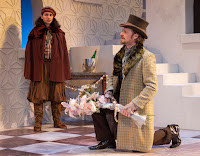 The stellar cast assembled by Director Jason King Jones, most of them STNJ veterans, is in fine fettle with the often-absurd plot twists and soaring romantic dialogue. As Viola, Eliana Rowe’ impersonation of a young man is terrific, whether it involves trying to hide her feelings for her master Orsino or attempting to extricate herself from the amorous clutches of Olivia. As Olivia, a delightful Billie Wyatt mourns her lost brother, rebuffs Orsino’s attentions and is ardent in her love for the youth and single-mindedly determined to land him as a husband. STNJ leading man Jon Barker’s Orsino (above, with Ty Lane) is wonderful as the lovesick duke, more in love with love than with Olivia; just watching him swan around the stage and throw himself onto a chair is worth the price of a ticket. And Jeffrey Mark Atkins as Sebastian does a fine job projecting confusion and delight at finding himself the object of a beautiful woman’s affection just by showing up. It helps, too, that he bears a close resemblance to his “identical” twin sister (Shakespeare knew nothing about genetics).

But the comic characters are the real stars of the play. As Feste, newcomer Cedric Lamar (left, center) truly is “wise enough to play the fool,” spouting truth in the guise of nonsense. He sings several songs, for which he composed the music, and keeps the silliness moving along at a steady clip. As the coarse and profane Sir Toby Belch, the troupe’s resident Will Kempe, Jeffrey M. Bender (left, at right) showcases his terrific skill at physical comedy, whether it involves stumbling around drunkenly, falling off the stage or engaging in a lively dance with Sir Andrew Aguecheek, who Sir Toby has decided will marry Olivia. As the knight, veteran Patrick Toon (left) matches Bender for sheer physicality and has a field day depicting the supposedly educated knight as a real doofus. 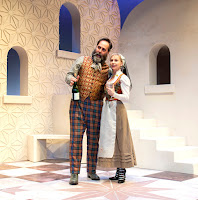 Ty Lane is perfect as their sidekick Fabian who spends a great deal of time egging on the two knights—in essence, having fun at their expense. Tarah Flanagan (right, with Bender) is a deliciously attractive saucy maid Maria, hell bent on merrymaking at her superiors’ expense, and Ty Lane’s Fabian is an able co-conspirator. The butt of their joke, the dour Malvolio, is masterfully played by Tony Award nominee and longtime STNJ veteran, Robert Cuccioli, who makes the humorless, austere, self-righteous and morally upright steward ripe for tricking. His appearance in yellow cross-gartered stockings with a silly rictus smile pasted on his face is hilarious, yet he elicits our sympathy when he conveys the vulnerability of the man locked up as insane. 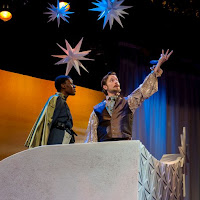 Brittany Vasta’s all-purpose set transports us to a white town reminiscent of Greece, home to this mythical kingdom of Illyria, with its embossed stucco walls, arched windows and doors, and staircases leading to roof terraces; Andrew Hungerford’s lighting mimics the blinding sunlight of that area of the world bordering on the Adriatic Sea. Costumes by Hugh Hanson are a kaleidoscope of color, pattern and silhouettes: Olivia’s somber black mourning dress; the checks, plaids and stripes worn by Sir Toby, Sir Andrew and Feste; and the exotic balloon pants and full sleeves worn by Fabian. Cedric Lamar’s faintly Elizabethan-sounding melodies provide musical entertainment while commenting on the romantic and silly high jinks. (Left: Rowe and Barker)
Discovering that one of the two youths before her is a man—and one who returns her love, at that—Olivia says, “Most wonderful!” which is the perfect description of this capstone to a challenging and thought-provoking season. A combination of romance, wit, silliness and physical comedy, it is a terrific way to celebrate the holiday season, to introduce your children to the Bard or to show your teenagers that his plays aren’t boring. With no worries as to whether it will fit, it is the perfect gift for everyone.
Twelfth Night will be performed at the New Jersey Shakespeare Festival’s F. M. Kirby Shakespeare Theatre on the Drew University campus in Madison Tuesdays, Wednesdays and Sundays at 7:30 p.m. and Thursdays through Saturdays at 8 p.m. through January 1; matinees begin at 2 p.m. on Saturdays and Sundays. The Theatre will present special family Matinee performances on Friday, December 23, and Wednesday, December 28. For tickets and information, call the box office at (973) 408-5600 or visit www.ShakespeareNJ.org online.
Posted by Ruth Ross