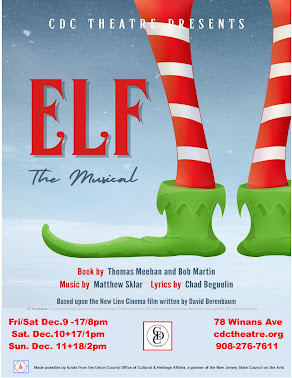 Elf, The Musical
WHEN: December 9th-18th; Fridays and Saturdays, December 9-17 at 8pm, Saturdays, December 10 and 17 at 1pm and Sundays, December 11 and 18 at 2pm.
WHERE: CDC Theatre, 78 Winans Ave in Cranford
For best ticket prices, selection and additional information, visit cdctheatre.org
Elf, The Musical will bring the heart, hilarity and joy of the Christmas season from December 9th through the 18th.
Based on the popular 2003 film, Elf, The Musical is a hilarious fish-out-of-water comedy that follows Buddy the Elf on his quest to find his true identity. Years ago, Buddy mistakenly crawled into Santa’s bag of gifts and ended up being raised as an elf at the North Pole.
Eventually, his poor toy-making abilities and enormous size cause him to realize that he is not really an elf. With Santa’s blessing, Buddy embarks on a journey to find his human family. Shocked to learn that his father is on the naughty list and his half-brother doesn’t believe in Santa Claus, Buddy is determined to win over his new family and help all of New York City remember the true meaning of Christmas.

Directed and Choreographed by the Perry Award-winning team of Ken and Mary Webb, the large cast is led by Sean Lynch-LittleJohn as Buddy, with Betty Mack as Jovie and Buddy’s newfound family, Walter, Emily and Michael Hobbs, played by Larry Brustofski, Lisa Benke and Loren Turner.

This modern-day holiday classic is sure to make everyone embrace their inner elf. After all, the best way to spread Christmas Cheer is singing loud for all to hear!