For a play about the 1967 riots in Plainfield, NJ, TyLie Shider’s drama, Certain Aspects of Conflict in the Negro Family has a great deal to say, but most of it has little to do with that seminal event in the Queen City’s history and a lot to say about old marital grudges, new-fangled ideas about music and hair styles, loosening sexual mores, and what constitutes work.

Recipient of the 2-21/22 Liberty Live Commission that seeks to develop and produce new plays celebrating New Jersey’s rich and diverse history, Certain Aspects examines the lives of two couples as racial and civil unrest begins spilling into Plainfield, New Jersey, during the Long Hot Summer of 1967. Thirty-odd years ago, Peach and Clif moved to Plainfield with their young son Junior for a better future, but now, as the riots begin, they—Clif especially—contemplate a return to their Georgia roots. He’s come around to persuade her to accompany him South. Meanwhile, Junior and his girlfriend Ruth are writing and producing the new music in the basement in hopes of making it big in show biz.

For 105 minutes, two couples—one old and one young—engage in a constant talkfest that, after a while, is repetitive and tiresome. How many times can Peach dredge up and excoriate her ex-husband Clif for his infidelities? How many times can Clif chide his son Junior about giving up his attempts to write and record a hit song instead of finding a real job? How many times can the pastor’s daughter Ruth tell Junior that he’s being too “handy” and that she’s not going to have sex with him until they are married?

For this reviewer, it was all too much, for while these concerns are/were real and pressing in the late 60s, the entire play is all talk and infinitesimal action and never reaches its full dramatic potential. Indeed, the only way we know that riots are going on are through the sound of a helicopter overhead, talk of curfews in Black neighborhoods and guns raided from a local business, and encounters Clif and Ruth have with local—probably white—policemen. Otherwise, we never see just how this unrest affects these four characters. 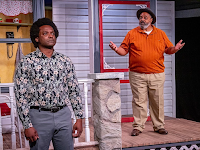 The blame, if you want to call it that, for this production’s shortcomings can be laid at the feet of both playwright Shider and Director Othell J. Miller. The latter failed to generate any real chemistry among the characters, often placing one at each side of the stage, just standing there, while they engage in what should be a lively conversation. Kena Anae (Junior; left) stands with his hands at his sides, slightly turned away from Eddie Gouveia Blackman (Clif) as his father tries to get him to abandon his dream of a hit record. In fact, Blackman is the only actor who really appears to be comfortable onstage, convincingly delivering dialogue as if it is real speech and not just words Shider wrote. 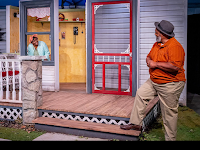 Nicole Prothro (Peach) sits mostly in her kitchen window, watching the world go by and arguing with her ex-husband ad nauseum about his philandering; years after she divorced him, she can’t seem to move on. Her static position doesn’t do much to make her a real person; she looks kind of like a puppet in a show! Similarly, after asking Peach for a list of groceries, Ruth spends much of the opening scenes sitting quietly on the right side of the porch, observing the action. 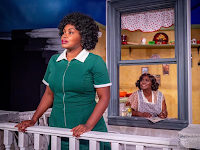 The play’s production values fare better. Bethanie Wampol Watson has designed a set that replicates the porch of a small, modest house; Greg Scalera’s sound, especially the music of the period (“Ain’t No Mountain High Enough” was one), gets the audience in the groove before the curtain goes up. Nia Saffar Banks dresses the actors in attire appropriate to the era (although I don’t think a young Black man would have worn those very white sneakers), and wigs by Rachelle Dorce Carey reminded us of the divide between older women (Peach’s straightened hair) and young (Ruth’s Afro; right).

Certain Aspects of Conflict in the Negro Family will be performed in a tent on the grounds of Liberty Hall Museum, 1003 Morris Avenue, Union, NJ, through October 23. Performances will take place Thursdays and Fridays at 8 PM; Saturdays at 3 PM and 8 PM; and Sundays at 3 PM. For information and tickets, call the box office at 908.737.4077 or visit Premiere Stages at www.premierestagesatkean.com