AWARD-WINNING HIT "GOD OF CARNAGE" COMES TO MORRISTOWN THIS MONTH 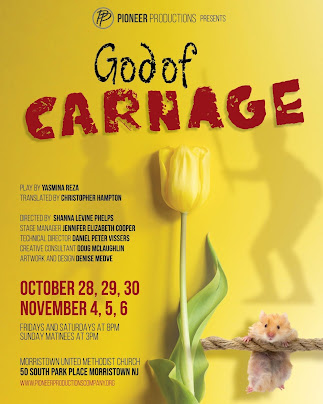 Playing out in real time over the course of 90 minutes, God of Carnage is a thrill ride into the most dangerous place on earth: parenthood. Following a playground altercation between two 11-year-old boys in Brooklyn’s upscale Cobble Hill neighborhood, the parents agree to meet to discuss the situation civilly. However, the veneer of polite society soon disappears (the drinking starts!), and the two couples regress to childish accusations, bullying and bickering themselves.

Translated from the French by playwright/screenwriter Christopher Hampton, God of Carnage received London's Olivier Award for Best Comedy and Broadway's Tony Award® for Best Play. The New York Times raved about the Broadway premiere calling it “a study in the tension between civilized surface and savage instinct” and “satisfyingly primitive entertainment with an intellectual veneer.”

“We’re excited to feature four talented local actors who work beautifully together to make up this tight-knit cast,” said Levine-Phelps. The cast includes Tom Olori of New City (NY), Leslie Darcy of Oakland, Miriam Salerno of Millburn, and Jon Beeler of Morristown. Additionally, Pioneer co-founder, Dan Vissers of Sparta, is the show’s Technical Director, with Doug McLaughlin of Hillsborough as Creative Consultant on the production. 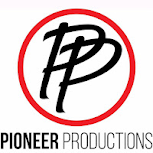 Pioneer Productions was incorporated in 2003 as a 501c-3 nonprofit theatre company by founding members Dan Vissers, Shanna Levine-Phelps and Jon Mantes. The Company’s mission is to share our collective human story through live theatrical performance by producing shows that are relevant to our time and inspire audiences to attend live theatre. To date, they produced sixteen plays and musicals throughout New Jersey. God of Carnage will be the Company's seventeenth production.