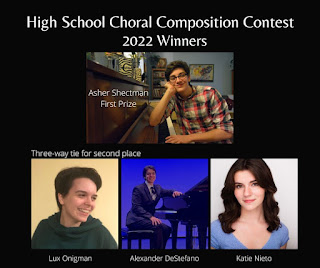 WHEN: Friday, June 3, at 7:30pm and Sunday, June 5, at 3:00pm
WHERE:  Our Lady of Sorrows, 217 Prospect St., South Orange, NJ.
Tickets are on sale now HERE
The entries were so good that there was a three-way tie for second place; winners are Alexander DeStefano, Katie Nieto, and Lux Onigman.

Artistic Director Dr. Anne Matlack says, "I am in awe of the talent of our student composers and thrilled to be supporting them for 25 years. The top four pieces were so outstanding we had to declare a three-way tie for second place this year. I wish time allowed us to perform them all, and I look forward to great things from all these young composers."

In addition to debuting the contest winner, Harmonium Choral Society’s Open Hearts concerts will feature two other world premieres, Love will Rise Again by Mark Miller and Amanda Harberg’s This!, as well as works by Eric Whitacre, Daniel Pinkham, Moses Hogan, and more.

The select Chamber Singers will perform What Do You Think I Fought for at Omaha Beach by Melissa Dunphy. Guest musicians include Kristine Lamb on flute and Prince Manvendra Singh Gohil on harmonium.

Grand Prize Winner Asher Shectman is a senior at Cranford High School. He is a self-taught pianist, bassist, guitarist, drummer, arranger, and composer. He plays percussion and conducts in his school’s concert and marching bands, and also participates in the concert choir, madrigal choir, jazz band, musicals, and a cappella group. Asher won the 2021 contest with his piece Alchemy, which was performed in March’s Resilience concert. He will study composition at Berklee College of Music in the fall.

Alexander DeStefano (second place) is a senior at Holy Spirit High School in Absecon, NJ and the winner of the 2021 Young Musicians Competition for Piano, Collegiate Division and the Grand Prize Winner of the 2021-2022 New Jersey Young Composers Competition for his piece No Longer, Not Yet. He won first place for piano performance in the 2021 Ester Weil Ocean City Pops Student Music Competition and the prestigious Algonquin Rising Star statewide classical music competition in 2018 and 2019. Alexander was also a winner in the 2021 State Teen Arts Festival and Atlantic County Teen Arts Festival. Alex is a member of Holy Spirit’s Tri-M music honor society and serves as its conductor. He will attend Rowan University as a member of the Honors College and major in music education next fall.

Katie Nieto (second place) is a performer and composer who specializes in musical theatre and is currently a senior at Kinnelon High School. Katie has participated in county, regional, and statewide ensembles (including the New Jersey All State Mixed Chorus) since she was in 6th grade and has ranked in the top five as a Soprano 1 on multiple occasions. As a music director and arranger, Katie co-founded the Breaking Barriers Theater Company and assisted them on their production of Spring Awakening. As a composer, she wrote the book, lyrics, and score for an original musical entitled Waiting for Tuesday about LGBTQ+ self-acceptance. She plans to attend Berklee College of Music in the fall.

Lux Onigman (second place) is a senior at Morristown High School. Last year, they tied for second place in the Harmonium composition contest with their piece Invictus. They were also recently commissioned to write a new song, A Welcome Thought, by the Crossing Chorale at the Unitarian Universalist Church at Washington Crossing. A solo vocal piece Lux wrote in 2020 was purchased by the National Youth Rights Association to display on their website. Lux sings in several choirs, including but not limited to the New Jersey Youth Chorus, Kol Dodi, and Harmonium Choral Society itself! Lux will attend Smith College in the fall.

Our judges worked hard to select the winners, basing their decision on breadth of sound and composition. Amanda Harberg's many commissions include those from the Philadelphia Orchestra Association, the Juilliard School, and the New World Symphony. Awards include three NFA Newly Published Music Awards, two New Jersey State Council on the Arts fellowships, a Fulbright/Hays Fellowship, and Juilliard’s Peter Mennin Prize for outstanding accomplishment. She currently teaches composition at Rutgers University and at the Interlochen Arts Camp.

Matthew Harris’s choral music is performed and recorded worldwide by major groups as well as school and community choruses. His A Child’s Christmas in Wales for chorus and orchestra was commissioned and premiered by Harmonium Choral Society 20 years ago. He is currently writing a work for the German vocal ensemble Ensemble Nobiles for a Leipzig Gewandhaus premiere.

Judge Sarah Rimkus received her BMus in music composition from the University of Southern California in 2013, where she developed a love of choral music while studying with Morten Lauridsen. She earned her PhD at the University of Aberdeen, Scotland, studying with Paul Mealor. She has received numerous awards, including the ASCAP Morton Gould Young Composer Award. Harmonium commissioned and premiered her multilingual In the beginning was the Word in 2019.

Harmonium invites the public to support and encourage young composers by attending the concerts. The concerts are accessible and safe for all concertgoers; accessibility information is available on the website. Requests for assistance or large print programs can be submitted to manager@harmonium.org or by calling 973-538-6969.

Funding has been made possible in part by Morris Arts through the New Jersey State Council on the Arts/Department of State, a Partner Agency of the National Endowment for the Arts.

Harmonium Choral Society, based in Morris County, is one of New Jersey's leading choral arts organizations. The 100-voice choral society has been recognized for its musical excellence and innovative programming, and has commissioned and premiered works by Amanda Harberg, Matthew Harris, Elliot Z. Levine, Sarah Rimkus, and Harmonium's composers-in-residence Mark Miller and Martin Sedek, among others.