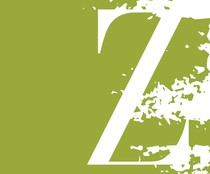 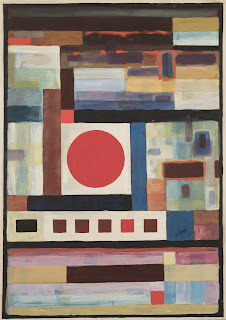 With heightened interest in Ukraine, the Zimmerli Art Museum at Rutgers University-New Brunswick has extended
Painting in Excess: Kyiv’s Art Revival, 1985–1993
WHEN: through April 10, 2022. The Zimmerli Art Museum is open Wednesday and Friday, 11 a.m. to 6 p.m.; Thursday, 11 a.m. to 8 p.m.; Saturday and Sunday, noon to 5 p.m. The museum is closed Monday and Tuesday, as well as major holidays and the month of August. The café is open Monday and Tuesday, 8:30 a.m. to 2:30 p.m.; Wednesday, 8:30 a.m. to 4:30 p.m.; and Thursday, 8:30 a.m. to 7:30 p.m.
WHERE: Zimmerli Art Museum, 71 Hamilton St., New Brunswick; the Zimmerli is a short walk from the NJ Transit train station in New Brunswick, midway between New York City and Philadelphia
ADMISSION: Admission is free to the Zimmerli Art Museum at Rutgers.
VISITOR INFORMATION
For the most current information, including safety protocols, parking, and accessibility, visit zimmerli.rutgers.edu. For Rutgers updates, visit Universitywide COVID-19 Information.
The exhibition creates a visual context of Ukraine’s history of self-determination and resilience, exploring the inventive new art styles by Ukrainian artists responding to a trying transitional period of perestroika (restructuring) during the collapse of the Soviet Union. The exhibition highlights an efflorescence of styles, rediscovered histories, and newly found freedoms that blossomed against economic scarcity and ecological calamity as the country reasserted its identity in the 1980s and 1990s.

“This exhibition captures and celebrates a moment of remarkable transformation in the art scene in late-Soviet Kyiv,” said guest curator Olena Martynyuk, who was born in Ukraine and holds a holds a master’s degree in cultural studies from the National University of Kyiv-Mohyla Academy (Kyiv, Ukraine) and a doctoral degree in art history from Rutgers. “With the lingering devastation of the 1986 Chernobyl nuclear catastrophe and imminent collapse of the Soviet Union, Kyiv was undergoing radical changes. Emerging Ukrainian art became a powerful agent in this transformation of the city from the provincial center of the Ukrainian Soviet Republic into a cultural capital.” 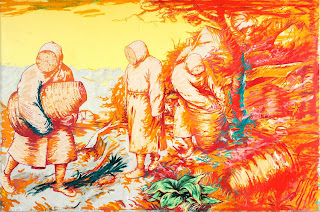 Excessive in its expressive manner and color, Kyivan painting of the late 1980s and early 1990s produced a new quality in art, no longer defined by the dichotomy of official and unofficial art during the Soviet era (1922-1991). Simultaneously, Ukrainian artists discovered chapters of local history that had been suppressed or deleted, as well as their decades-long exclusion from the global library of art. Thus, allusions to antique ruins and other spoils of Western culture abound in Ukrainian painting. The museum is pleased to showcase perhaps the most well-known work of this time, Georgii Senchenko’s wall-sized Sacred Landscape of Peter Bruegel (1988, above), an oil rendering of Bruegel’s ink drawing The Beekeepers and the Birdnester (1568). Restored for this exhibition, it had not been shown since the 1988 Moscow Youth exhibition, which for the first time presented the new Ukrainian art as a coherent stylistic and intellectual phenomenon.

A section of the exhibition focuses on the Painterly Preserve, a collective founded in 1992. Members of the group were preoccupied with the history of the forbidden Ukrainian avant-garde of the early 20th century – an unfinished venture – and gravitated toward abstraction. Their formal explorations were often a gradual disassociation from storytelling and subject matter in painting. Midnight (1981) and Guest (1982), two oil paintings by Tiberiy Silvashi, the unofficial leader of the group, demonstrate the prevalence of the materiality of color that would soon overcome his rudimentary storytelling, transitioning into pure abstraction.

The exhibition also provides historical context with a selection of works by artists who were active in Kyiv during the 1960s and 1970s. They experienced various degrees of recognition – and persecution – anticipating many subjects and themes that became relevant for the generation that emerged in the 1980s. Some artists, including Alla Horska and Opanas Zalyvakha, explored the previously forbidden avant-garde tradition and spoke openly about Communist injustices. Others were identified as dissident threats and were expelled from jobs or imprisoned, and their art was destroyed. Some, including Oleksandr Dubovyk, were deprived of state commissions and positions of power. Artists such as Valery Lamakh and Hryhorii Havrylenko (top image: Composition VIII-II, 1962) practiced art entirely outside the system, in their private apartments without the public or institutional resources.
Painting in Excess also represents the culmination of an important international collaboration that brings together more than 60 works of art, most of which have never been exhibited in the United States. A selection of paintings and works on paper is drawn primarily from the Zimmerli’s Norton and Nancy Dodge Collection of Nonconformist Art from the Soviet Union, supplemented by loans from the Abramovych Foundation, and a group of Ukrainian art collectors, facilitated by support from Tymofieyev Foundation.
In addition, this is a rare opportunity to exhibit these 33 artists together, many of whom are the most well-known of their generation in Ukraine: Oleksandr Babak, Oleksander Hnylytskyj, Oleg Holosiy, Anatoly Kryvolap, Mykola Matsenko, Kostiantyn Reunov, Oleksandr Roitburd, Arsen Savadov, Marina Skugareva, Oleg Tistol, and Aleksander Zhyvotkov.

The exhibition is organized by guest curator Olena Martynyuk, Ph.D. with assistance from Julia Tulovsky, Ph.D., the Zimmerli’s curator of Russian and Soviet Nonconformist Art. Painting in Excess: Kyiv’s Art Revival, 1985-1993 is accompanied by a catalogue of the same title, co-published with Rutgers University Press.
Recordings of past related events, including Music in Excess: A Concert of Ukrainian Avant-Garde Music and Roundtable on Painting in Excess, are posted on the Zimmerli’s YouTube channel go.rutgers.edu/ZimmerliOnYT.

Painting in Excess is the second exhibition focusing on Ukrainian art within the Dodge Collection. “These artists were very important to the late Norton Dodge, who spent more than three decades acquiring artwork from the former Soviet Union,” Tulovsky stated. “He was very eager to showcase collection’s vast number of works by Ukrainian artists, as they have not been widely represented in other exhibitions of art from the Soviet era.”

The exhibition, related programs, and Dodge fellowships are made possible by the Avenir Foundation Endowment Fund and the Dodge Charitable Trust – Nancy Ruyle Dodge, Trustee, with additional support from the Abramovych Foundation and the Tymofieiev Foundation. The exhibition catalogue Painting in Excess: Kyiv’s Art Revival, 1985–1993, co-published with Rutgers University Press, received support from the Ukrainian Institute in Kyiv.

The Zimmerli holds the largest collection in the world of Soviet nonconformist art, thanks to a remarkable 1991 donation from Norton and Nancy Dodge. Over 20,000 works by more than 1,000 artists reveal a culture that defied the strict, state-imposed conventions of Socialist Realism. This encyclopedic array of nonconformist art extends from about 1956 to 1991, from the beginning of Khrushchev’s cultural “thaw” to the dissolution of the Soviet Union. In addition to art made in Russia, the collection includes nonconformist art produced in the ethnically diverse Soviet republics of Armenia, Azerbaijan, Belarus, Estonia, Georgia, Kazakhstan, Kyrgyzstan, Latvia, Lithuania, Turkmenistan, Ukraine, and Uzbekistan.

The Zimmerli’s operations, exhibitions, and programs are funded in part by Rutgers, The State University of New Jersey, and income from the Avenir Foundation Endowment and the Andrew W. Mellon Foundation Endowment, among others. Additional support comes from the New Jersey State Council of the Arts, as well as donors, members, and friends of the museum.
Posted by Ruth Ross