TO MY READERS: I post this sad notice here because I have promoted Nai-Ni Chen's dance classes and performances on my blog in the past. The community has lost a great artist. 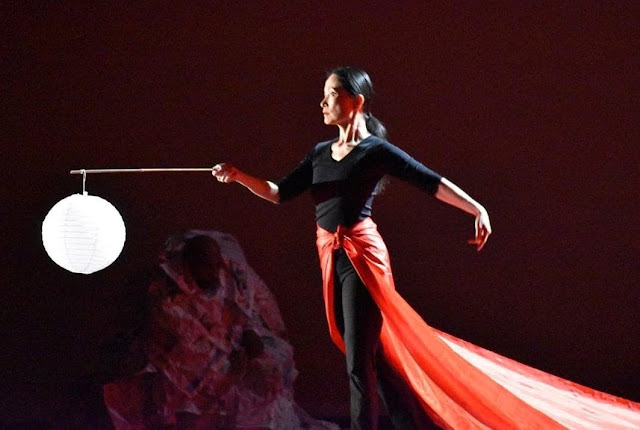 "The members of the Board of the Nai-Ni Chen Dance Company are devastated by the loss of our dear friend Nai-Ni Chen, who died in a swimming accident while on vacation with her family in Hawaii on Sunday. Her innovative work as a choreographer and dancer is deeply rooted in her Asian-American immigrant experience and strongly impacted the mainstream American dance scene. Our hearts go out to her family, and we are committed to preserving her legacy," said Board Chair Theresa A. Shubeck.

Nai-Ni Chen, the founder, choreographer and Artistic Director of the Nai-Ni Chen Dance Company, comes from a rich dance tradition. She was a renowned traditional dancer in Taiwan where she was born and served on several ambassadorial culture missions to nineteen countries around the world including a one-month engagement on Broadway in the Minskoff Theatre. An early member of the Cloud Gate Dance Theater of Taiwan, she graduated from the Chinese Cultural University and came to America to seek her own voice in the world of contemporary dance. Since the inception of her Company in 1988, Ms. Chen has created a rich and wide-ranging repertory, collaborating with a diverse group of musicians, artists, and cultural bearers. Touring over 25 years around the United State, her company has been presented in major performing art centers and communities covering the continental United States.

In addition to domestic touring, her company has also performed at international festivals in Mexico, Canada, BVI, Guatemala, Germany, Poland, Russia, Lithuania, South Korea and China with support from Fund for Mutual Understanding, The President’s Committee for the Arts, Arts International and the State Department of the United States. Ms. Chen has received multiple Choreographer’s Fellowship from the National Endowment for the Arts and from New Jersey State Council on the Arts. Her work has also been commissioned by the Joyce Theater Foundation, the Lincoln Center Institute, the Geraldine R. Dodge Foundation, Dancing in the Streets, the Mid Atlantic Arts Foundation and New Jersey Performing Art Center.

Besides creating dances for her own Company, she has choreographed the opera Turandot for several productions and was commissioned to create work for New Jersey Ballet, Dancing Wheels Company and Ballet Met in Ohio. She has taught master classes at colleges and universities throughout the United States and at dance festivals in Russia, Poland, Germany, Taiwan, China, and Mongolia. She was invited to set her work on students in professional schools and colleges including the Ailey School in New York and Case Western Reserve University in Ohio and Long Island University in New York. Her other teaching credit also include Mary Anthony Dance Studio, Peridance, Rutgers University, New York University and New Jersey City University. She has been a principal affiliate artist of the New Jersey Performing Arts Center since its inception. On television, Ms. Chen is an often-featured artist on PBS/NJN’s “State of the Arts.” With her dedication to dance education for children K-12, she received Distinguish Artist to the Field Award from Association of Teaching Artists and Lincoln Center Education in 2020.

The mission of the Nai-Ni Chen Dance Company is the creation and production of world class dance performances, training, and educational opportunities that advance its founder’s vision, whose innovative work as a choreographer and dancer is deeply rooted in the Chinese American immigrant experience, their struggle for social and environmental justice, and fight for race and gender equality.

“As an immigrant artist, my early work was focused on presenting my treasured roots, my Asian training, and my culture to the American audience and have input into the mainstream dance scene. Too often, with the divisions in our country, people overlook the importance of Asian culture being part of the evolution of American culture," said Nai-Ni Chen in November 2020, about the mission statement. "My vision is for audiences to see it, recognize it and appreciate it. Whether I am creating contemporary work or preserving traditional work, these are all part of getting people to be aware of our existence, to promote the interest of understanding the uniqueness of it, and to recognize its contribution to this society. In doing this, my vision has emerged to explore global issues and bring recognition and credit to all immigrant cultures.”