Final Rehearsals for Vanguard Theater Company’s Next to Normal, Plus Integrated Care Concepts  Talk Back after the Sunday, November 14, Matinee 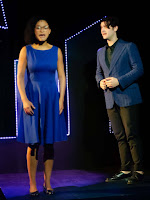 NEXT TO NORMAL
WHEN: November 10-21
WHERE:  Vanguard Theater, 180 Bloomfield Avenue, Second Floor, Montclair
Tickets are available at https://www.bit.ly/ticketsVTC

In addition to casting two very different groups of actors in the roles of Gabe, Natalie and Henry, Vanguard cast a woman in the roles of Drs. Fine and Madden, originally written for a man. These casting choices bring extra complexities and layers to what the New York Times has called a “Feel Everything Musical.”
Video previews are available of the entire cast, as well as what Vanguard calls the Dr. Madden Cast (performing on odd numbered dates) and the Dr. Fine Cast (performing on even numbered dates).

Next to Normal tells the story of one family’s journey through grief, mental illness, and navigating suburban life. With music by Tom Kitt, and book and lyrics by Brian Yorkey, this groundbreaking musical was a Pulitzer Prize- and Tony Award-winner when it opened in 2009. Vanguard’s production stars Broadway actress Erica Dorfler (Book of Mormon, Memphis, Great Comet, A Christmas Carol), surrounded by a cast of stellar professional actors.

Vanguard’s mission of changing the narrative through theater dedicated to DREAM—Diversity, Reciprocity, Education, Activism and Mentorship—is front and center in this production. One of the hallmarks of Vanguard’s success is partnering with non-arts organizations.

For Next to Normal, Vanguard is thrilled to partner with Montclair’s Integrated Care Concepts, one of only a handful of centers nationally that approaches mental health comprehensively, with a continuum of care from medicine, psychotherapy, and mind-body interventions. Vanguard is also partnering with the Darkness Rising Project, a mental health awareness 501(c)3 nonprofit offering free community wellness workshops to inspire conversations about mental health, address issues which directly affect the Black community, connect attendees to resources, and erase the stigma.

The Sunday, November 14 matinee will be followed by a talk back with a panel of health care professionals from these organizations.

In addition to partnering with mental healthcare organizations, the Friday, November 12th performance, is a partnership with Out Montclair, which is having its monthly 21+ event at the theater, with a pre-show wine and cheese reception followed by the show. 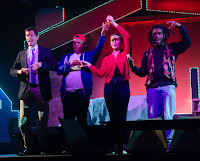 In choosing Next to Normal as its premiere Mainstage show in its new theater, Vanguard was mindful of the disparities in diagnosis and healthcare for mental illness. According to the American Psychiatric Association’s Mental Health Facts for African Americans, while the rate of bipolar disorder is the same among black Americans as it is among other Americans, black Americans are less likely to receive a diagnosis and, therefore, treatment for this illness. And black adults are also less likely to receive guideline-consistent care, less frequently included in research, and more likely to use emergency rooms or primary care (rather than mental health specialists). Stigma and judgment prevent black and African American people from seeking treatment for their mental illnesses. When black Americans do seek treatment, they are offered medication or therapy at lower rates than the general population.

Vanguard hopes that, by presenting Next to Normal in the context of a diverse family, this production will shine a light on these disparities and share valuable resources for those who need care.
Founded in 2015, Vanguard Theater Company is a 501(c)(3) committed to changing the narrative through theater dedicated to DREAM: Diversity, Reciprocity, Education, Activism & Mentorship. Our year-round programming is made possible through generous support from TeeRico by Lin-Manuel Miranda, NJ State Council on the Arts, NJ Arts & Culture Recovery Fund, Investors Bank, collaborations with community organizations, and the generosity of many individual donors. For more information, visit www.VanguardTheaterCompany.org or find us across social media @VTCNJ and #dreamVTC
Posted by Ruth Ross