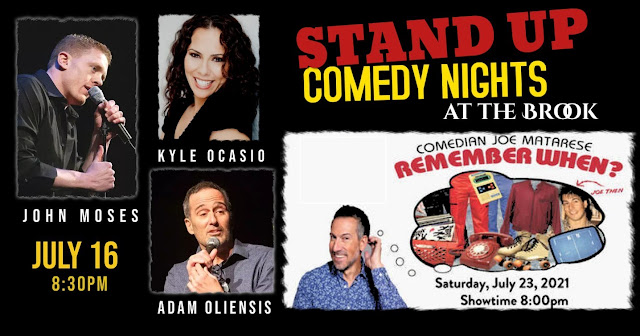 Laughter begins at the Brook Arts Center, as we launch our Stand-Up Comedy Nights. Join us in welcoming three hilarious comedians, John Moses, Kyle Ocasio and Adam Oliensis, on Friday, July 16, at 8 PM.

For over 15 years, John Moses has delightfully offended audiences in the U.S., Canada and the U.K. Moses considers himself an “equal-opportunity offender”. His style is shrewd, raw and uncompromisingly funny.

Comedian Kyle Ocasio has been touring the country for over ten years. She brought laughter to U.S. troops across eight different countries, while playing with Armed Forces Entertainment. Ocasio was featured on AXS TV's Gotham Comedy Live and regularly appeared on several TV shows including the popular Fox News satirical political comedy show Red Eye. She was the face of Optimum TV's Soccer Mom Goals, a show with a comedic twist on "momentating" on the 2018 World Cup.

Host Adam Oliensis is attuned to the absurdities that arise in daily life, exploring both the irony and silliness that exist in the most humiliating situations. He appeared on the Comedy Central Daily Show with Trevor Noah. His album, Aged Whine, can be heard on Sirius XM Radio 99, Raw Dog Comedy.

On Friday, July 23, at 8 pm, Comedian Joe Matarese presents his humorous tour, Remember When, a nostalgic comedy of the 80s and 90s with only one man. Come see the show that is taking off on Tik Tok. Joe will take you back to a time before computers and cell phones existed and going clubbing seven nights a week seemed important!  Widely known for his performance on 'Americas Got Talent', Matarese won the public long before that, working in the metropolitan area stand-up circuit since he was 19 years old and has since made appearances on the most sought-after TV and radio shows.

Do not miss all these hilarious live shows at the Brook Arts Centre!