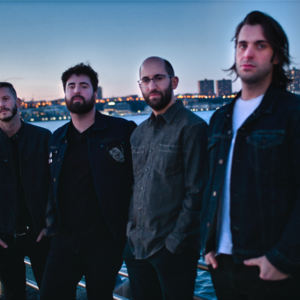 The new album released via Mint 400 Records (via The Orchard/Sony) is the follow-up record to their Billboard-charting debut record, the album reached #21 most-added on the NACC Radio chart cracking the Top 200 at #195.

FOR MORE INFO VISIT OUR ONE SHEET

With Laser Tooth Tiger, Ruby Bones was at a precipice. Did they need to write a record lamenting the current doom and gloom of the world? To highlight the never-ending news, the feelings of being stuck inside? Or did they want to write an album for the aftermath—a party record for their friends to rage to.

They chose the latter.

Paying tribute to all their favorite indie rock bands and instilled with youthful nostalgia, Laser Tooth Tiger merges overdriven guitars with classic rock riffs and an underlying sense of adventure. It’s a record detailing the trials and tribulations of being young while reaffirming that it’s all worth it and you’re going to be just fine.

Under The Radar premiered the video for the single “Don’t Lose Your Head” calling it "a brilliant indie rock rager with a hopeful core." The video  was written and directed by Brian Lonano (Gwilliam), received Music Video of the Year at the Coney Island Film Festival, was nominated for an Audience Award at the Georgia Film Festival, and became an official selection at the Oscar-qualifying Hollyshorts Film Festival.