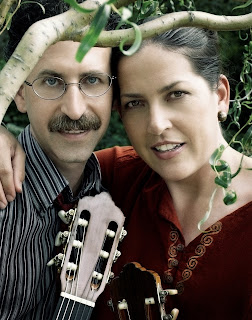 The acclaimed Newman & Oltman Guitar Duo will perform in a concert celebrating the heritage of Hispanic and Latin American tango traditions from Argentina and Uruguay. The duo will present works honoring guitar greats Astor Piazzolla and Daniel Binelli including Piazzolla’s Tango Suite, and Binelli’s Paris Desde Aqui and Metropólis with the Binelli Ferman Duo.  The program will also feature guitarist Adam Tully.

On July 20 the Newman & Oltman Guitar Duo will perform the world premiere of a new Leo Brouwer work, composed this month for Newman & Oltman, Through the Looking Glass for Two Guitars (after Louis Carroll), commissioned by Jeffrey Nissim and the New York Guitar Festival, paying tribute to the iconic classical guitarist Julian Bream (1933-2020) and the legacy of his celebrated duo with John Williams.

Says Laura Oltman and Michael Newman about Bream, “Julian Bream brought artistry to a new level in the world of the guitar.  He reached out to major composers, performed complex and intellectually-stimulating works, led a renaissance of music from the Renaissance, and captured the hearts of generations of young performers intent on following in his deeply musical footsteps.” 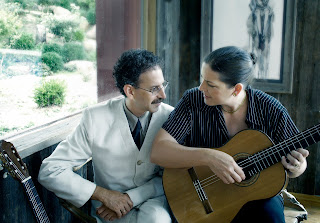 Hailed as a "revelation to hear" by The Washington Post, the Newman & Oltman Guitar Duo is recognized for their matchless technique, ensemble precision, and innovative programming, combined with their commitment to expanding the repertoire for guitar duo. Widely recognized as an influential ensemble both in the US and abroad, they perform a broad range of repertoire that spans baroque and classical works to Spanish and Latin American rhythms that showcases their diversity.

In addition to their phenomenal musicianship, they are dedicated to inspiring the next generation of guitar players through their many educational endeavors and are Directors of the New York Guitar Seminar at Mannes. They are founders and Artistic Directors of Raritan River Music, which has commissioned works for them from Lowell Liebermann, Pulitzer prize winner Paul Moravec and Augusta Read Thomas among others.

To learn more about The Newman & Oltman Guitar Duo and access media images, please visit www.guitarduo.com. For airplay or review copies of their recordings, or to schedule interviews, please contact Genevieve Spielberg at 908-608-1325, or genevieve@gsiartists.com.