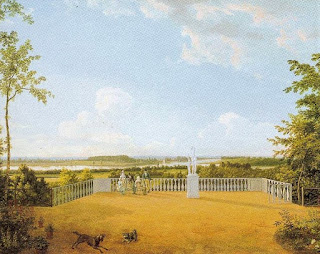 A new video released by D&R Greenway opens with a birds-eye view of Point Breeze, the former Joseph Napoleon Bonaparte estate preserved by the land trust, the City of Bordentown and the New Jersey Green Acres Program at the end of 2020. Using drone photography, viewers see a flyover of the 3,000 acre Abbott Marshlands, on the edge of the Bordentown property, as the title of the video emerges, Preserving Point Breeze, a New Jersey Treasure. The new seven-minute video can be viewed on D&R Greenway’s website at www.drgreenway.org.

The story of Point Breeze begins with recognition of the land’s 13,000 years of layered history, going back to Native Americans who lived here along the Delaware River and Crosswicks Creek. Chief Mann of the Ramapough Lenape was a guest speaker at D&R Greenway’s recent Gala that celebrated preservation of this land. He spoke about the importance of land to the Lenape, offering seeds and advice for gardens that will be planted at Point Breeze next spring, closing with a traditional blessing for the land and its inhabitants that include all of Earth’s creatures. (Above: Point Breeze 1818 by Thomas Birch) 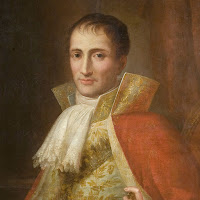 The ecology of the land and the birds that were observed and perhaps sketched by visitor John James Audubon when he visited his friend Charles Lucien Bonaparte at Point Breeze can be seen in the video. Bonaparte’s gull was named for Charles, a renowned ornithologist of his day. The video tells the story of ornithology at Point Breeze, as it showcases the unique features of the property with stunning videography. (Right: Joseph Bonaparte)

Most compelling is the story of preservation, as told by Mayor James Lynch of Bordentown City. Recognized with D&R Greenway’s prestigious 2021 Donald B. Jones Conservation Award for championing preservation, Mayor Lynch tells how the land was literally rescued from developers who wanted to build warehouses on this historic property.

Speaking of its importance to water quality in the Delaware River, Mayor Lynch says, “It would have been destruction. I lost a lot of sleep over this…it was my mission to preserve this property as best I could from the City side.” He tells how he learned from the former owner, Divine Word Missionaries, who owned the land for 80 years that the property would be sold. “I looked at the building, and I said, Father, that would be a great City hall.  And, he looked at me and said, ‘Well, we have some other news for you. Linda Mead of D&R Greenway and the State of New Jersey are already along the process of purchasing the entire property.’”

As the video continues, Linda Mead, D&R Greenway CEO and President, shares more of the story, “This was the last piece of land that was open in Bordentown City….Can you imagine if this last piece of open space was built on? We would lose the history, we would lose the ecology…Preserving this property was paramount. It was one of the most important things that D&R Greenway has ever done.”

As the video draws to a close, the Mayor expresses his pleasure that this land has been saved for his community, and the world, “I don’t think I could smile any more. To look back on this…Incredible!”

When this new video was premiered to D&R Greenway supporters with live speakers who represented the varying aspects of history, ecology and preservation, the comments were overwhelmingly positive:

“Point Breeze and D&R Greenway’s St. Michaels Farm Preserve – 316 preserved properties altogether – permanently protected by D&R Greenway, are testaments to the power that exceptional land trusts can wield to literally define the landscape, history and future of our country.”

With the public release of the video, Point Breeze, a New Jersey Treasure, everyone can now learn of the importance and value of this property and hear firsthand the passion that drives preservation. Inspired viewers are invited to contact D&R Greenway if they would like to volunteer as docents or gardeners at Point Breeze.