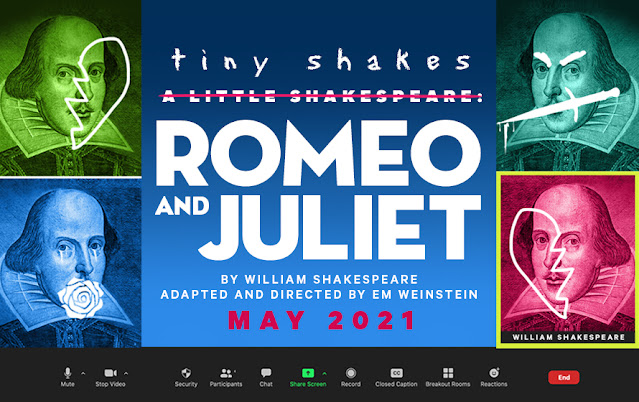 Every season, Two River Theater introduces hundreds of young people—and adults—to the work of the Bard through its annual A Little Shakespeare program, now in its eighth season. More than 140 students from 28 different schools have participated in seven A Little Shakespeare productions: As You Like It, A Midsummer Night’s Dream, Pericles, The Merry Wives of Windsor, The Comedy of Errors, Macbeth and Twelfth Night. The program has welcomed over 7,000 audience members, including more than 2,800 students from 35 schools across the state of New Jersey.

This year, the program takes the limitations of 2021 as an opportunity for students to delve deeply into Shakespeare's star-crossed romantic tragedy, giving them the agency to tell the story of each scene in their own way and film it: traditional Zoom scene reading? Rap battle? Movement or dance piece? Animation? The sky’s the limit!

“I'm so excited to be returning to Two River's A Little Shakespeare program for this exciting, elaborate, and experimental take on Shakespeare's Romeo and Juliet. Over the course of several weeks, the teens and I will tear into this great tragedy and make something entirely our own. This collage will be sure to feature music, acting, filmmaking and the incredible talents of a diverse group of teens from schools all over,” says adaptor and director Em Weinstein.

Video submissions will be edited into a theatrical collage that can be accessed through Two River’s website this May. There, audiences and educators can take the journey of the play through the videos, and continue to use this site as a resource.

Record a video between 2-3 minutes inspired by a scene or moment from Shakespeare's Romeo and Juliet. If you're interested in acting in the show, please make sure the video includes you speaking a monologue from the show. Be as creative as you wish! The video can include music, dance, humor, found footage, drawings, etc. The main purpose of this video is for us to get to know who you are, so the main task is to be your weird, wonderful self.

Em Weinstein is a writer and a director of new plays, films, musicals, and interactive installations. At Yale School of Drama, where they received their M.F.A. in directing in May 2019, Em’s credits include the first workshop production of Slave Play by Jeremy O. Harris, as well as an all-female, pop-infused Romeo & Juliet set in a Catholic high school. Their thesis production, Arden (or Shakespeare’s as u like it), was an immersive musical co-written with Michael Breslin that explored queer utopias and featured original songs by Julian Hornik. As an educator, Em ran the Guerrilla Filmmaking Program for Teens and directed the teen ensemble’s touring production of A Midsummer Night’s Dream for the 52nd Street Project. Em was also a Fall Festival Director for Shakespeare & Company and directed in their Shakespeare in the Courts program for adjudicated youth. They graduated summa cum laude from Smith College.