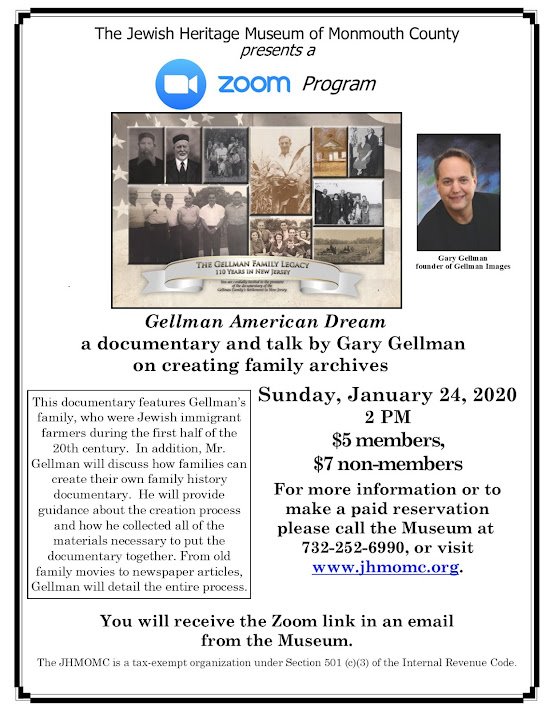 This documentary features Gellman’s family, who were Jewish immigrant farmers during the first half of the 20th century. In addition, Mr. Gellman will discuss how families can create their own family history documentary. He will provide guidance about the creation process and how he collected all the materials necessary to put the documentary together. From old family movies to newspaper articles, Gellman will detail the entire process.

“We recorded interviews with family members in their 80s and 90s, incorporated old film reels, photographs, media publications, and created a 30-minute piece that documents our family history said Gellman. “Our Jewish history came alive as we produced this documentary and uncovered our fascinating past. It is indeed remarkable what Jewish farmers needed to do to survive.”

Daytime Edition, to discuss the multi-media industry. He has been a featured speaker at conventions in Las Vegas, Philadelphia, and Atlantic City. Gellman completed his broadcasting and journalism studies at The College of New Jersey.

The Jewish Heritage Museum is located in the Mounts Corner Shopping  Center, at 310 Mounts Corner Drive Freehold, NJ, at the corner of Route 537 and Wemrock Road (between the CentraState Medical Center and Freehold Raceway Mall). It is on the second floor of the historic Levi Solomon Barn.

The JHMOMC is a tax-exempt organization under Section 501 (c)(3) of the Internal Revenue Code. Although not currently open to the public, the Museum is handicapped and assistive-listening accessible.