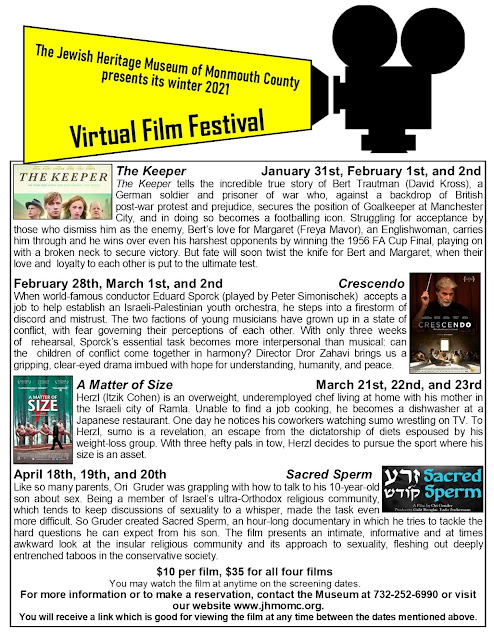 The Keeper tells the incredible true story of Bert Trautman (David Kross), a German soldier and prisoner of war who, against a backdrop of British post-war protest and prejudice, secures the position of Goalkeeper at Manchester City, and in doing so becomes a footballing icon. Struggling for acceptance by those who dismiss him as the enemy, Bert’s love for Margaret (Freya Mavor), an Englishwoman, carries him through and he wins over even his harshest opponents by winning the 1956 FA Cup Final, playing on with a broken neck to secure victory. But fate will soon twist the knife for Bert and Margaret when their love and loyalty to each other is put to the ultimate test.

In Crescendo, When world-famous conductor Eduard Sporck (played by Peter Simonischek) accepts a job to help establish an Israeli-Palestinian youth orchestra, he steps into a firestorm of discord and mistrust. The two factions of young musicians have grown up in a state of conflict, with fear governing their perceptions of each other. With only three weeks of rehearsal, Sporck’s essential task becomes more interpersonal than musical: can the children of conflict come together in harmony? Director Dror Zahavi brings us a gripping, clear-eyed drama imbued with hope for understanding, humanity, and peace.

A Matter of Size, a story of Herzl (Itzik Cohen), an overweight, underemployed chef living at home with his mother in the Israeli city of Ramla. Unable to find a job cooking, he becomes a dishwasher at a Japanese restaurant. One day he notices his coworkers watching sumo wrestling on TV. To Herzl, sumo is a revelation, an escape from the dictatorship of diets espoused by his weight-loss group. With three hefty pals in tow, Herzl decides to pursue the sport where his size is an asset.

In Sacred Sperm, like so many parents, Ori Gruder was grappling with how to talk to his 10-year-old son about sex. Being a member of Israel’s ultra-Orthodox religious community, which tends to keep discussions of sexuality to a whisper, made the task even more difficult. So Gruder created Sacred Sperm, an hour-long documentary in which he tries to tackle the hard questions he can expect from his son. The film presents an intimate, informative and at times awkward look at the insular religious community and its approach to sexuality, fleshing out deeply entrenched taboos in the conservative society.

The Jewish Heritage Museum is located in the Mounts Corner Shopping  Center, at 310 Mounts Corner Drive Freehold, NJ, at the corner of Route 537 and Wemrock Road (between the CentraState Medical Center and Freehold Raceway Mall). It is on the second floor of the historic Levi Solomon Barn. The JHMOMC is a tax-exempt organization under Section 501 (c)(3) of the Internal Revenue Code. Although not currently open to the public, the Museum is handicapped and assistive-listening accessible.