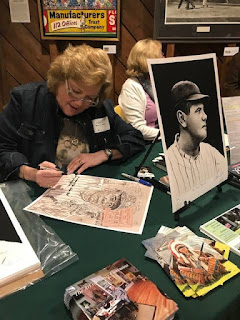 Grandparents and parents seeking holiday gifts for their Little Leaguers will be inspired by watching D&R Greenway’s latest video, Fields of Dreams, featuring sports and the outdoors in the starring role.

“My grandfather looked up to Father Mathais, a mountain of a man, and Babe stood head and shoulders over the other kids,” says Linda Ruth Tosetti about her grandfather’s mentor at a Catholic school. Viewers are treated to historic photos of Baltimore’s Inner Harbor from Babe Ruth’s youth. Sports fans will be fascinated to hear the story of how he learned to throw. 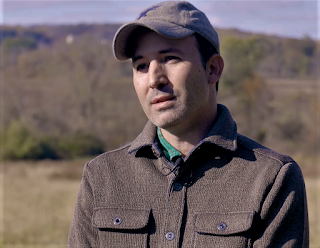 The video begins with D&R Greenway trustee James Fiorentino (right), an artist who has painted many of baseball’s legendary players. Fiorentino was the youngest artist ever to have his art featured in the National Baseball Hall of Fame in Cooperstown, NY, when he was only 15 years of age. Having begun his sports art career with Joe DiMaggio and Ted Williams, James became a college baseball player himself. He talks about the connection he feels to the land while outdoors in the field, and how important this is in forming a lifelong love of nature.

Since 1989, D&R Greenway has permanently protected over 21,000 acres of land in central New Jersey. Fiorentino became Vice-Chair of the Board of Trustees of the land trust in 2019. He generously shares his talents, connections and love of the outdoors to ensure it is accessible to all.

Farm View Fields and Greenway Meadows parks in Princeton were both saved from housing developments and preserved in 2001 through the leadership of D&R Greenway. These parks provide baseball and soccer fields, as well as places to walk and experience the outdoors. In the video, D&R Greenway’s President and CEO Linda Mead shares that being outdoors in nature cultivates creativity and calm in children who are known to have ADHD.  The viewer learns that, in fact, Babe Ruth may have had “nature-deficit disorder,” a term coined by author Richard Louv in his book Last Child in the Woods published in 2005.  Linda Ruth Tosetti insists that, throughout his legendary life, her grandfather was sustained by nature. “He was a fisherman and huntsman. That’s where he got his solace.”

In his books about connecting children with nature, Louv says he is convinced that “The future will belong to the nature-smart...to those who balance the virtual with the real...achieving natural balance.” He encourages taking children to parks regularly, close to home. His words ring true during this COVID-era: “Near is the new far.”

During the past year, D&R Greenway partnered with the Trenton Thunder baseball team at Waterfront Park in Trenton where parts of the video were filmed. Mead says, “The way many, many people connect with nature and the outdoors is through the sports their children play when they are young.”

The benefit of spending time in the outdoors has been proven in many academic studies. The University of Michigan demonstrated that participant’s memory performance and attention spans improved by 20 percent after just an hour of interacting with nature. University of Illinois researchers discovered that children show a significant reduction in the symptoms of attention-deficit disorder when they engage with nature. Professionally led field trips with city children have proven that so-called at-risk students who have not had much experience in nature show a marked improvement of 27% in test scores related to mastery of science, when they learn in weeklong residential outdoor education programs.

Ending on a happy note, high school students from the Latin American Legal Defense and Education Fund’s FUTURO program share how they feel when they are out in nature. These students have worked in partnership with D&R Greenway over the past year, learning about nature’s benefits, clean water and open spaces. In contrast to being indoors during the pandemic, these students’ words about “a good lost” while outside on a wide, open field will stick with the viewer for a long time.

A visit to a local park, and a bat and ball, could be the perfect gifts for children who have felt cooped up this year. The lands preserved by D&R Greenway provide many opportunities.

Information on where to go and the new 7-minute video Fields of Dreams can be found on D&R Greenway Land Trust’s website, www.drgreenway.org.