Celebrate The 100th Birthday of The Dybbuk 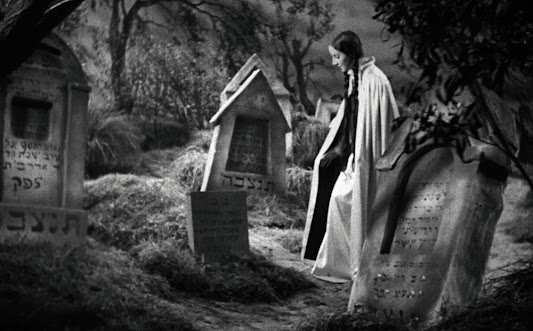 WHEN: premiered Monday at 7 p.m. EST. The production will remain on YouTube indefinitely.
WHERE: www.youtube.com/channel/UCImhbhZ0JyMyEG1_KPnOXYQ.
Watch a trailer HERE

Under the direction of Allen Lewis Rickman, who also provides English narration, the online production of THE DYBBUK will be performed in Yiddish featuring English subtitles, with a script adapted by Allen Lewis Rickman (from an adaptation by Dina Halperin, who appeared in the 1937 film version).

Playwright S. Ansky wrote THE DYBBUK from late 1913 through 1915 in Russian and it was later translated into Yiddish by Ansky himself. The play had its world premiere in that language, performed by the Vilna Troupe in Warsaw on December 9, 1920, 30 days after the playwright’s death. Legendary impresario Max Reinhardt, upon seeing the Vilna production, famously declared “This is not a play, this is a religious rite!”

THE DYBBUK was subsequently translated into over 25 languages and performed thousands of times all over the world. On September 1, 1921, the play had its American premiere at the grand opening of Maurice Schwartz’ Yiddish Art Theatre in New York, starring Schwartz and Celia Adler. The play was an important artistic and commercial hit. Along with numerous Broadway productions, the film adaptation of THE DYBBUK was released in 1937 directed by Michał Waszyński. It is still being produced in countless adaptations, as well as operas, ballets and symphonic suites. The play is considered the jewel of the Jewish theatre.

Based on years of research by S. Ansky, who traveled between Jewish shtetls in Russia and Ukraine, documenting folk beliefs and stories of the Hassidic Jews, THE DYBBUK relates the story of a young bride possessed by a dybbuk – a malicious possessing spirit, believed to be the dislocated soul of a dead person – on the eve of her wedding.

This virtual presentation serves as a particularly personal way to honor THE DYBBUK as two members of the company had close relationships with notable figures from the play’s initial premieres. As a young teen, Mike Burstyn appeared in three plays with Maurice Schwartz and the two families became lifelong friends. Shane Baker’s mentor, Luba Kadison, had a small role in the original production and she went on to star as Leah, a role she would reprise throughout her years onstage. Her father Leib Kadison founded the Vilna Troupe during World War I.