LIVE THEATER IS BACK IN ENGLEWOOD, NJ—JUST ACROSS THE GWB FROM MANHATTAN 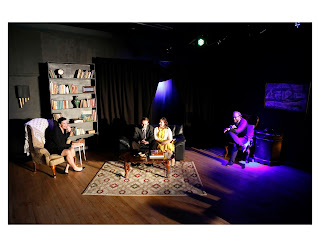 WHO'S AFRAID OF VIRGINIA WOOLF?

WHEN: October 29 through November 22, Thursdays through Sundays at 8pm
WHERE: Black Box Performing Arts Center is located at 49 E Palisade Ave, Englewood, NJ 07631
TICKETS: $40 for adults and $35 for students/seniors
Tickets can be purchased at www.BlackBoxPAC.com

Edward Albee’s critically acclaimed Who’s Afraid of Virginia Woolf was chosen as the season opener for many reasons, one being the small four person cast. The intimate show is perfect for the black box theater, located on Palisade Ave.

“On our first date night out since before the pandemic, my husband and I really enjoyed seeing Who’s Afraid of Virginia Woolf at Black Box Performing Arts Center, in Englewood, NJ.” says Englewood resident Amy Lebovics. “The performance was interesting, unusual and professional.”

The Cast is a group of close-knit actors who have worked together on previous shows: Michael Gardiner, Danielle MacMath, Sean Mannix, and Ellen Revesz. The show is directed by BBPAC Artistic Director Matt Okin.

George, a professor at a small college, and his wife, Martha, have just returned home, drunk from a Saturday night party. Martha announces, amidst general profanity, that she has invited a young couple—an opportunistic new professor at the college and his shatteringly naïve new bride—to stop by for a nightcap. When they arrive the charade begins. The drinks flow and suddenly inhibitions melt. It becomes clear that Martha is determined to seduce the young professor, and George couldn’t care less. But underneath the edgy banter, which is crossfired between both couples, lurks an undercurrent of tragedy and despair. George and Martha’s inhuman bitterness toward one another is provoked by the enormous personal sadness that they have pledged to keep to themselves: a secret that has seemingly been the foundation for their relationship. In the end, the mystery in which the distressed George and Martha have taken refuge is exposed, once and for all revealing the degrading mess they have made of their lives. (Courtesy of Dramatists Play Service, Inc.)