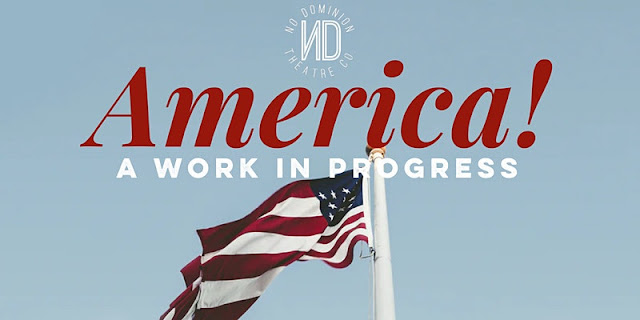 America!: A Work in Progress
A 3-day online event detailing the progress of the company’s latest work, the epic political drama, America! by Michael Joel.

WHEN: Wednesday, November 13 - 15, 2020*
WHERE: Eventbrite
TICKETS: offered on a pay-what-you-can scale with a suggested donation of $20. One ticket purchase gains access to all three days, as well as future access to any of the materials (after the event has ended). Any donation over $40 will receive a copy of the script in progress! No Dominion will donate 10% of all ticket sales to the ACLU.
Tickets can be purchased at https://www.eventbrite.com/e/america-a-work-in-progress-tickets-125024438461

Each day, new content surrounding the play will be released, from interviews, source material, performances, and more.

Over four years in the making, America! is told from the perspectives of a conservative news anchor, a suburban housewife, and a newly elected president and his opposition, and examines the American political system, the media’s effect on it, and how that system can go from seemingly bad to unimaginably destructive.

The play was initially inspired by the 2016 Election and the goal was to premiere it in a theater around the time of this election, but as I am sure you can imagine, plans had to change. So I wanted to take the play, still very much a work in progress, and give it to some of No Dominion’s favorite collaborators, including artists of all different mediums, and see what they could do with it. Theatre has always been a very collaborative process for me, so given the current state of things, this seems like the best way to collaborate with some of my favorite artists.

“I had created this play to mirror what is happening now, and then depict the worst possible future we can imagine.” Joel continues, “This was back in 2016. Now it has been so strange to see what the future has actually become. It is still nowhere near what is depicted in the play, but we are living in this weird sort of balance where we are totally uncertain of the future in this country. I’ve had moments where I think, ‘Maybe I should go back and write this thing that happened on the news into the play,’ but at this point if I did, that the play would never end.”

Joel tells us that this play is still very much a work in progress, and that feedback is welcome. This three-day online event offers audiences a look into his creative process to see pieces of the play as told by other artists. “The hope is to excite people about the eventual production, hopefully coming sometime next year,” he says.

FRI, NOV 13: Take a peek at curated source materials that inspired the play, including texts, video clips, music, and images, and tune in for an interview with the playwright, Michael Joel, and our resident dramaturg, Carrie O'Dell, about the inspiration for the play and exciting plans for the future.

SAT, NOV 14: Commissioned works based on the play will be available to view at your leisure on the event page. We are thrilled to commission our frequent collaborators and friends to develop new, original pieces in different mediums, using the play as inspiration. More details to follow.

SUN, Nov 15: Our weekend concludes on with a live virtual performance followed by a live Q&A with all of the commissioned artists.