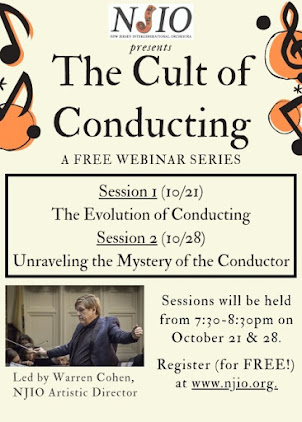 The Cult of Conducting
WHEN: Wednesdays, October 21 & 28,  7:30pm-8:30pm
WHERE:
TICKETS: free
Advance registration is required for this free webinar series. To register, visit www.njio.org and simply click on the Cult of Conducting poster under “Current Event.”

The New Jersey Intergenerational Orchestra (NJIO) is proud to present a two-session series titled “The Cult of Conducting.”  Artistic Director Warren Cohen is excited to share his insights with a fascinating overview of orchestral conducting over the past three centuries. He will answer such questions as:

•      Why do orchestras need conductors?

•      How has conducting changed over the years?

This webinar will be of interest to orchestral audiences and orchestral musicians alike.

Session One (Wednesday, October 21) – The Evolution of Conducting.

This session will have a multicultural perspective over the last 300 years and try to answer the question of why orchestras need conductors?  Conducting is a lot more than having everyone follow the music as the conductor beats it.  As music has changed over the years, the role of the conductor has changed significantly.  We will explore the history of orchestra leadership as it has evolved in this time, specifically in the Western tradition.

Session Two (Wednesday, October 28) – Unraveling the Mystery of the Conductor

This session will offer insight into the conductor’s world and will also help audience members better understand what is going on at the podium.  Does all of that movement really mean something or not? We will explore the relationship between gestures and sound.  We will make use of famous conductor clips throughout to illustrate the point.  This session will make going to the symphony even more enjoyable!

Warren Cohen joined the New Jersey Intergenerational Orchestra as Artistic Director in 2013. He is also Music Director of the MusicaNova Orchestra in Phoenix, Arizona. In 2012, he became Concert

Artist in Conducting at Kean University. He served as Music Director of the Scottsdale Baroque Orchestra, the Fine Arts String Orchestra, and the Southern Arizona Orchestra, where he was appointed Music Director Laureate upon his resignation.

Mr. Cohen began his musical career as a pianist and composer. He has conducted over a thousand orchestral, operatic and choral works. He studied conducting with Gustav Meier and

Paul Vermel and at the English National Opera during the last year of the administration of the “power trio” years when the company was led by Sir Mark Elder, David Pountney, and Sir Peter Jonas.

He now lives in South Orange, New Jersey with his wife, soprano Carolyn Whitaker, and his son Graham, an award-winning composer and violist who studies at The Juilliard School.

NJIO, now in its 26th season, has been recognized as a national leader in intergenerational excellence through its unique approach to teaching musical performance.  Not only do the members aged 8 to 80 play together, but they also mentor one another. In addition to providing free concerts and outreach to the community, NJIO has been invited to perform at the Kennedy Center for Performing Arts in Washington, D.C. and at the United Nations, and was a finalist for the Eisner Prize for Intergenerational Excellence.  NJIO welcomes new members of all ages and abilities each concert period to one of its several orchestras - no auditions needed!

This program is made possible by funds from the New Jersey State Council on the Arts, a partner agency of the National Endowment for the Arts.