2ND ANNUAL VOICES INTERNATIONAL THEATRE FESTIVAL
WHEN: RUNS OCT 16 TO 25 WITH LIVE OPENING CEREMONY SUN., OCT 18
WHERE: Zoom
ADMISSION: Tickets for the opening ceremony are $35 (for the live event) and $15 online.  Festival passes with access to all shows and events are $120, $10 for individual shows
For Festival tickets passes visit www.jctcenter.org
Running from Friday, October 16, to Sunday, October 25, the 2nd annual Voices International Theatre Festival is a unique hybrid of virtual and live events featuring 23 productions from 21 groundbreaking theatre companies hailing from a total of 20 countries—in Europe, Eastern Europe, South Asia, Asia, the Middle East, Africa and the US (New York-NJ).
The festival’s opening ceremony on Sunday, October 18, is a specially designed, socially distanced live-assembly gathering in Liberty State Park in Jersey City, combining both live and virtual elements, including classes during the afternoon and a performance-ceremony broadcast live at 6pm EDT.
The Festival is divided into three parts: 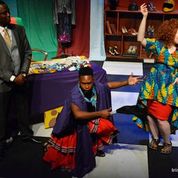 South African playwright Palesa Mazamisa’s biting satire, Shoes and Coups, is one of several shows in the 2nd annual Voices International Theatre Festival that look courageously and compassionately at the fractured state of the world, showing the human, psychological and spiritual tolls of systemic injustice. Having premiered at the Market Theater in Johannesburg in 2018, Shoes and Coups opens the Festival, which is produced by the Jersey City Theater Center (JCTC), on Friday, October 16, at 10am EDT, in a live Zoom performance. 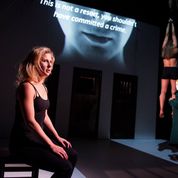 Three theatre companies from protest-torn Belarus will also be represented: The internationally acclaimed underground Belarus Free Theatre sends us Burning Doors, about persecuted artists living under dictatorship (who will not be silenced). Co-created by the company’s co-leaders—the playwright and journalist Nikolai Khalezin and theater producer Natalia Koliada—the show is made with the complicity of Pussy Riot’s Maria Alyokhina, who provided much of the testimony and who performs in the scorchingly physical production in her stage debut. Burning Doors is paired with the documentary Alone, also made with the participation of Alyokhina, about the political awakening of a Ukrainian pop star as he attempts to free a Crimean dissident.

Mogilev Theatre shares Second Hand Time, by the Nobel Prize winner Svetlana Aleksievich, from Belarus, who is currently under threat of arrest and sequestered in her home, with a rotating cordon of diplomats protecting her around the clock. The adaptation of Aleksievich’s novel telling the story of Soviet life from Stalin to Putin performs on Sat., Oct 17, at 2pm.
Also from Belarus, which is currently gripped by mass protests sparked by the rigged election of dictator Alexander Lukashenko, the Grodno Regional Puppet Theatre offers Poem Without Words, a parable of resistance against oppression about a little person in a glass cube and the futile pursuit of a paradise that doesn’t exist but that beckons just the same.  Conceived and directed by Oleg Zhiugzhda and Larisa Mkikina-Probodyak, this unique puppet theatre play performs on Sun., Oct 18, at 8pm.
Among the other notable companies and artists participating are Ranan from India; Roman Viktyuk Theatre from Russia; RAAAM Theater Group of Estonia; Manuel Vignoulle from France; Matara from Israel; New York-based Sidra Bell Dance; Los Escultores del Aire from Spain, and Haeboma from South Korea. (Full list below)

“Many of the artists and groups we are inviting are acclaimed in their home countries as well as internationally,” says Olga Levina, the artistic director of the Jersey City Theater Center (JCTC), who is originally from Belarus.  “Their work is a direct response to the state of our world and the need for greater equity and unity.  Their stories are eloquent, forceful and often surprising, and their messages and testimony are riveting and shattering.  They deserve as wide an audience as we can give them.”

The 2020 Voices International Theatre Festival is supported by the City of Jersey City (Mayor Steven M. Fulop); the Jersey City Municipal Council, Office of Cultural Affairs; the New Jersey Division of Travel and Tourism; Hudson County Cultural Affairs; businesses and organizations across the State, as well as several neighborhood groups in Jersey City.  Adds Levina: “We are proud of our partnership with Jersey City, the Golden Gateway of America which has one of the highest concentrations of ethnic groups by population density in the country.  Our mission is to be an annual festival that is as local as it is global.”