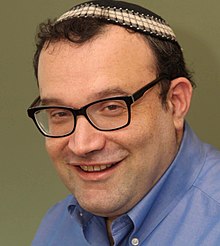 Jewish Culture 101 will offer a FREE class examining Philip Roth’s wondrous short story “Eli, the Fanatic,”which tells of an acculturated Jewish lawyer, Eli Peck, who when charged with expelling a “fanatical” Hassidic yeshiva that has moved into his suburban community, begins to wonder who, exactly, is the fanatic. What’s the relationship between fervent religiosity and mental illness? The story has a lot to say about that topic, and it may surprise you.

You can read the story to prepare for class here.

There will be two other free Thursday classes in September: my very popular Debbie Friedman 101 class, which more than 1,500 people have taken so far, will be offered September 17, and we’ll finish up our series of Roth short stories on September 24 with my favorite short story of any kind ever, “The Conversion of the Jews.” That gorgeously written and richly evocative tale shows Ozzie, a bar mitzvah boy whose rabbi cannot answer challenges to his theology, respond by forcing the rabbi to adopt Christianity. It’s delightful.

And for October,“Greatest Hits” Thursdays have been supercharged with “Jewish Culture Academy,” which includes two repeat classes per week.

TUITION: A monthly pass to all ten classes for October is $25 (less than $3 a class).
Register here: bitly.com/BenkofOctober

Jewish Culture Academy is designed to accommodate the many requests I get for repeat classes. Without sufficient sign-ups, though, I will stop the Thursday “Greatest Hits” classes and only offer the Monday all-new classes.

Also new for October is the eight-week Judaism 101 course set for Wednesdays at Noon EDT, starting October 7. Every week, we’ll explore the most important knowledge and wisdom needed to understand Jewish history, life cycle, calendar, Israel, values, Hebrew, theology, Bible, and the Jewish home. All are welcome—Jews with no background; Jews with minimal or moderate Jewish educations; and non-Jews. Limited to 40 participants