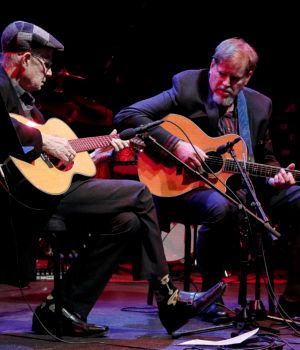 The jazz world is anchored by people like guitarist Vic Juris, musicians possessing such talent they can be counted on to seamlessly lead or support sessions of all sorts. Throughout his career, Juris supported funky organists, boppish horn players and even the ultra-modern saxophonist David Liebman, who in a post-mortem tribute pronounced him “the hardest worker I have known.”

We can proudly call the Jersey City native “local talent” who lived most of his life in North Jersey. Indeed, when he wasn’t on the road, Juris could be found playing somewhere in the region. Coronavirus notwithstanding, it’s odd to see jazz listings and not find that Juris is performing somewhere locally. “I always have gigs,” he said in 2017. “I always make sure that I’m playing, and that there’s a challenge in it for me.” Juris died December 31, 2019, at Saint Barnabas Medical Center in Livingston, NJ, at the age of 66 after a six-month battle with liver cancer.

Anyone who follows guitarists can tell you they’re a close-knit bunch. They go to each others’ gigs, check out their compatriots’ compositions and albums, and, in the case of guitarists Dave Stryker and Juris, lived in the same West Orange neighborhood. There was always a sense of mutual admiration when they got together and jammed or simply crossed paths and talked shop.

An example of that will be on display on September 20 at the New Jersey Jazz Society’s Virtual Social, when Stryker will give a nod to his late friend while performing some of his own material as well.

Ever since he arrived in New Jersey from his native Omaha some 40 years ago, Stryker has been ubiquitous on area stages and in clubs. He has performed with such notables as organist Jack McDuff and saxophonist Stanley Turrentine, among others and has numerous album credits as a writer and arranger, some 50 as an album sideman, and nearly as many under his own name.