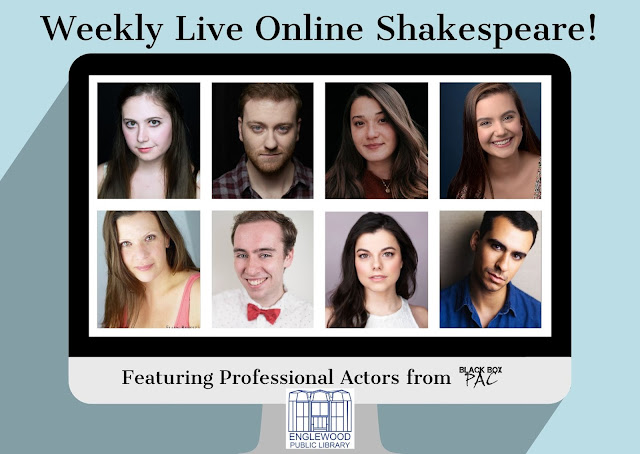 WHEN: Wednesdays; Performances begin at 8pm and run 60 to 90 minutes.
WHERE: via Zoom or Library’s Facebook page
For more information, please email arthur@englewood.bccls.org or visit @EnglewoodPublicLibrary on Facebook.

Black Box Performing Arts Center and the Englewood Public Library have teamed up to present weekly live readings of Shakespeare’s plays via Zoom. The performances are also live streamed to the Library’s Facebook page and are at 8:00PM on Wednesday nights. 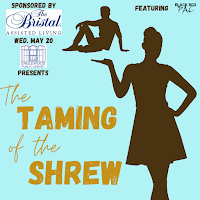 Black Box Performing Arts Center, a 501(c)3 non profit theater company and performing arts school, first collaborated with the Englewood Public Library in the summer of 2018 for the now annual free Shakespeare in the Park Bergen County. When the library and theater closed this March due to the pandemic, Library Director John Arthur reached out to the Black Box team to see if there was something special they could do to keep patrons entertained as they stay home.

The readings, now weekly, began as a one-time event—a shortened version of the famous Hamlet. As a result of the positive response, the readings continue. More than 20 BBPAC actors have put on six readings as of this writing, with more planned. They have ranged from the classic comedy As You Like It to putting a spin on the Bard’s plays, such as an all-female Macbeth (with the exception of the three witches). Next up is a gender-bent reading of the inciting The Taming of the Shrew, sponsored by The Bristal Assisted Living of Englewod. 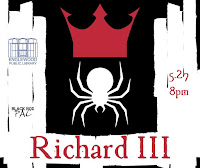 “We love working with the Englewood Library, and I’m so grateful to participate in these readings,” says actor Danielle MacMath, actor and founding members of the Black Box Repertory Company. “It’s a wonderful way to stay connected to my creative side, and I have a lot of fun playing different characters and studying a new play each week.”

Fellow founding Rep Co. Member and actor Michael Gardiner agrees: “It’s a perfect creative and collaborative outlet. And allows audiences and actors alike to experience Shakespeare’s plays—well-known or less-known—in fresh and interesting ways by hearing them aloud spoken by energetic and skilled professionals. Keeps me sane!” Gardiner also serves of BB's Director of Shakespeare Programming in summer and throughout each season. 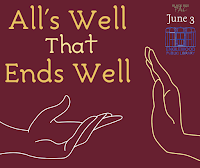 Tentative schedule of the next few shows: