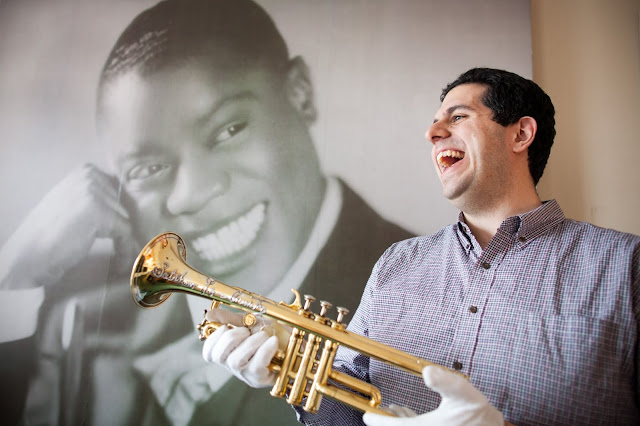 The Night Before Christmas

Louis Armstrong was the personification of joy, and the New Jersey Jazz Society Social at Shanghai Jazz in Madison, Armstrong scholar Ricky Riccardi will be spinning Louis' The Night Before Christmas recording, discussing it, and playing some live music with trumpeter Danny Tobias and drummer Rich Noorigian. (Riccardi will be on piano).

Riccardi, a resident of Toms River, is Director of Research Collections at the Louis Armstrong House in Queens and the author of What a Wonderful World: The Magic of Louis Armstrong's Later Years (Pantheon Books: 2011). His second Armstrong book, Heart Full of Rhythm, about Armstrong's big band years, will be published in 2020 by Oxford University Press.

"Louis Armstrong," says Riccardi, "was terrific around children, two attributes that come to the forefront in his reading of The Night Before Christmas. We may never know how this recording came to be. Did Louis do it on a whim?" It was produced by Continental Records, but, according to Riccardi, "was distributed by the Lorillard tobacco firm. Lorillard printed up one million copies to start selling for Christmas in 1971."

The New Jersey Jazz Society produces 10 Sunday Jazz Socials a year, which are free to members.

Funding for the NJJS Socials has been made possible in part by Morris Arts through the New Jersey State Council on the Arts/Department of State, a partner agency of the National Endowment for the Arts.