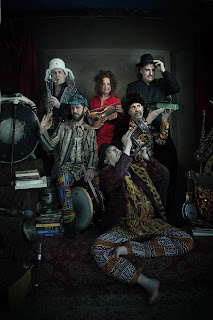 Since their emergence more than 30 years ago, the Klezmatics have raised the bar for this age-old, nearly forgotten art form and helped change the face of contemporary Yiddish culture. Although often called a “Jewish roots band,” the music is both traditional and progressive, incorporating jazz, folk, Latin, rock and even punk influences. It will appeal even to those who are not familiar with the genre.

“Klezmer has everything you want ethnically, and yet it’s so intertwined with American culture,” said Morrissett. “We want to make sure that we are part of a living tradition, and living traditions change; they don’t stay in a pickled form.”

“From early on, we decided that if we sang songs, they would be ones we believed in,” said Sklamberg.

The documentary, The Klezmatics: On Holy Ground, was released in 2010. In response to the film, Time Out New York magazine proclaimed, “The Klezmatics aren’t just the best band in the klezmer vanguard; on a good night, they rank among the greatest bands on the planet.”

Kean Stage at Kean University educates, entertains and challenges audiences by presenting high-quality programs that reflect the diversity of the region and of the arts. These cultural offerings complement the intellectual life of the classroom for our students, increase opportunities for community engagement, and provide affordable access to the arts for New Jersey residents. Audiences of all ages are invited to enjoy a wide range of professional theatre, Broadway tours, dance performances, concerts, international films and family-friendly shows. In addition, Kean Stage encourages University students to attend events, and provides several opportunities to explore the performing arts through master classes, workshops, lectures, and employment opportunities as ushers, backstage technicians and box office staff. Visit www.keanstage.com.