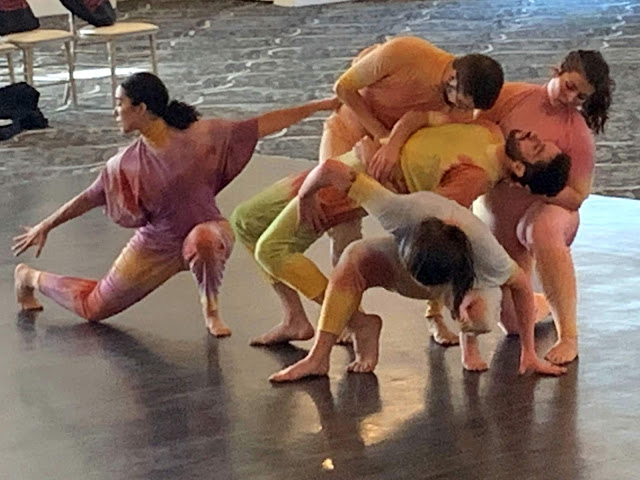 Seven student pieces were chosen for the concert and include choreography by Mikayla Ahart (Hillsborough), Alexandra Dougherty (Hillsborough), Elanna Etemad (Warren), Sharon Rodden (Bridgewater), Evangelina Sandoval (Franklin Township), Emily Stecher (Berkeley Heights), and Cedric Thomas (North Plainfield). The student choreography is the culmination of a semester of classwork as the students created and rehearsed the new works to be performed.

In addition to the student works, guest artist Dr. Bill Bauer will present a quintet featuring RVCC dancers that premiered in summer 2019. The piece, Games People Play, is a study in Plastique animée. Plastique is a term used by musician Émile Jaques-Dalcroze to represent a visceral method of music analysis; in a sense it is the interpretation of music in a physical performance. Executive Director of the Dalcroze Society of America, Bauer teaches music at the College of Staten Island/CUNY, where he serves as Coordinator of Musical Performance and the Dalcroze Atelier. Bauer received his Ph.D. in Composition and M. Phil. from the CUNY Graduate Center and his MA in Composition from Columbia University. He earned his Dalcroze License and Certificate in Dalcroze at Manhattan School of Music.

Pieces included in DanceWorks also tour with the Raritan Valley Dance Ensemble (RVDE), under the direction of Loretta Fois. RVDE performs at local schools, senior centers and community groups each semester, as well as at campus events.

For information about scheduling a lecture/performance for a school, senior center, or community group, contact Fois at lfois@raritanval.edu.