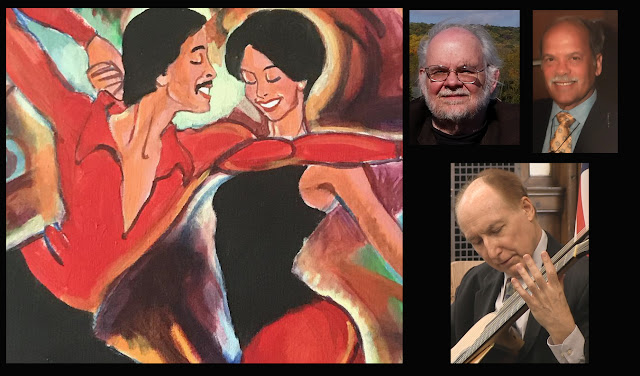 "I was introduced to the wonderful paintings of Luis Martinez Piar at a recital by guitarist Stanley Alexandrowicz at the Dover Public Library," Maestro Butts said. "I loved the design and color, but most of all I was moved by the fluidity and motion within the paintings. I felt as if they were singing to me."

Stanley has premiered other works by Maestro Butts, including Early Morning Suite, Tombeau in memoriam Vaclav Kucera, and Shadows in the Sun. "I have always been so impressed with Stanley's interpretation of my music," Maestro Butts exclaimed. "He has performed my work all over the world. A special treat was in 2015 when I had the opportunity to hear Stanley perform my music in a wonderful concert in London!"

There has been much music composed inspired by paintings. Perhaps the most famous of all is Modeste Mussorgsky's Pictures at an Exhibition, with each movement related to a specific painting of Victor Hartman.

"Impresiones inspiradas isn't so much a musical depiction of any one painting," Maestro Butts added. "It's more impressions and feelings inspired by viewing his paintings as a collection. I have tried to incorporate some musical ideas inspired by Caribbean music—like the sarabande as a musical form or the habanera as an underlying rhythm. I also composed specifically with Stanley in mind, having heard his excellent interpretations of not only my works, but the works of composers ranging from the Renaissance to the modern eras."