“She Loves Me" Opens at The Barn Theatre in Montville

She Loves Me is a warm romantic comedy with an endearing innocence and a touch of old world elegance. Set in a 1930s European perfumery, we meet shop clerks, Amalia and Georg, who, more often than not, don't see eye to eye. After both respond to a "lonely hearts advertisement" in the newspaper, they now live for the love letters that they exchange, but the identity of their admirers remains unknown. Join Amalia and Georg to discover the identity of their true loves... and of all the twists and turns along the way! 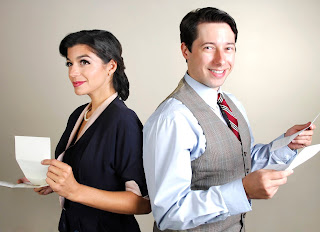 The cast of “She Loves Me” features Jenn Bedell as Amalia Balash, Bobby Snyder as Georg Nowack, Lindsay Rich as Ilona Ritter, Sean Lynch-Littlejohn as Steven Kodaly, Ryan Folger as Arpad, Jimmy Spadola as Sipos, Rich Maloy as Mr. Maraczek, Patrick Horan as the maitre’d, and Tom Schopper as the waiter/Mr. Keller. The ensemble features Cheryl Bookstaver, Leslie Silverman, Adelaide Prekopa, Will Roper, Billy Brisley and Matt Cotton. “She Loves Me” is directed by Scott Hart with musical direction by Jack Bender and choreography by Roxanna Wagner.