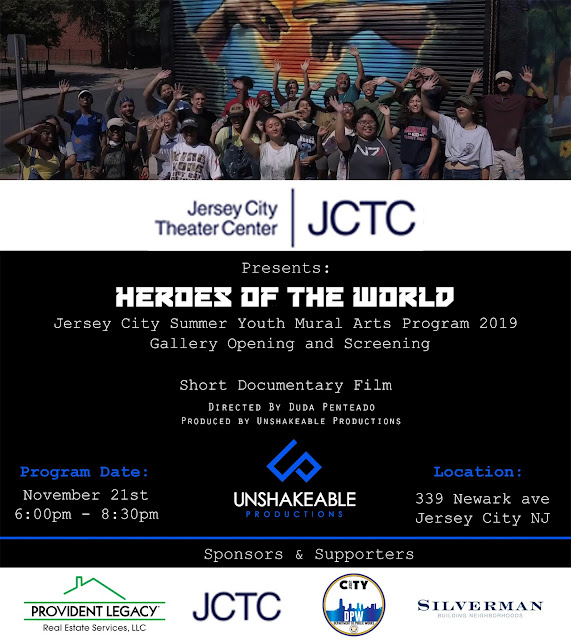 HEROES OF THE WORLD

Jersey City may be known for its many murals, but rarely do we find out about the artists who create them. That’s about to change when Jersey City Theater Center (JCTC) showcases the young talent behind the city’s newest public art display, Heroes of the World.

Heroes of the World, a socially-engaging mural located at 1 Ocean Avenue in the Greenville neighborhood of Jersey City, depicts a wide and diverse range of trailblazing personalities and historical figures. This one-of-a-kind, 200-foot-wide, public work of art—the longest mural in Jersey City—was created by a hand-pick team of aspiring Jersey City artists through the Jersey City Summer Youth Mural Arts Program 2019.

JCTC Presents Heroes of the World is an early-evening event that utilizes both the art gallery and black box theater at Merseles Studios. In addition to screening a short documentary on the mural, the preliminary sketches and paintings of each historical figure featured on the mural will be exhibited. JCTC Presents Heroes of the World is not just a revealing glimpse into the artistic process that went into one of Jersey City’s most original murals, but gives the art and the artists the exhibition experience they both deserve. (Above, right: Jersey City’s newest generation of homegrown muralists at work on Heroes of the World, the city’s newest mural located at 1 Ocean Avenue in Greenville)

“Art revitalizes neighborhoods and improves everyone’s quality of life,” said Olga Levina, Artistic Director, JCTC. “Everyone should visit the Heroes of the World in Greenville, which is a testament to what is possible with the arts. The mural shows us the leaders today’s youth look up. JCTC wants to present these young artists and their art in a gallery setting and see the talent, intelligence and creativity that went into this project.”

More than 100 portfolios by young artists were received for the 2019 mural program. The 29 artists – who range in age from 13 to 22 – selected for this six week project also underwent an interview process that fully aware of the responsibility involved – from mural conception to the hours of painstaking wall painting in the summer heat.

The program is a hands-on, intensive muralist workshop for aspiring artists. Co-instructors for the program are Duda Penteado, Jersey City-based fine artist and filmmaker and Catherine Hart, a Jersey City-based fine artist and muralist. As part of their muralist training, the students took field trips to murals in Jersey City as well as to the Metropolitan Museum of Art. (Above, left: Catherine Hart and Duda Penteado, Co-Instructors for the 2019 Jersey City Summer Youth Mural Arts Program)

The student artists formed small teams to work on specific sections of the wall, receiving step-by-step instruction on public art techniques, concept development, surface preparation, design enlargement, paint application, and preservation of outdoor art. In addition to completing a public work of art, the project’s objective was to instill in them a comprehensive work ethic essential to their future career as professional artists. 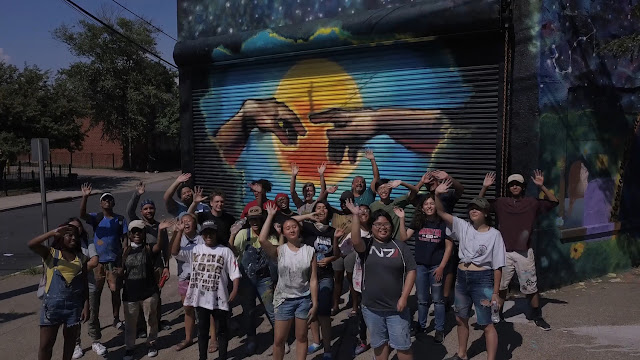 The students decided who would appear on the wall, selecting inspiring figures responsible for positive social, political and artistic change. “The mural is meant to inspire a dialogue within the community of Jersey City,” said Penteado. “JCTC’s mission is to inspire conversations through the arts and this mural not only aligns with that mission but we hope to take a more in-depth look at the artists and their work at Merseles Studios . Presenting a gallery show and putting the spotlight on these artists is the final step in the creation of what is truly an open-sky museum.” (Above: The heroes behind the Heroes of the World mural. This team of hand-picked young artists created Heroes of the World, Jersey City’s longest murals. The artists and their preliminary sketches and studies that resulted in this remarkable piece of public art gets the Gallery Experience.)