Holidays can be tough for many families, what with lively—often heated—political discussions; secrets kept and divulged; and scores to settle. Economic and social inequality, a raging case of post-9/11 PTSD and stiff religiosity produce the fraught situation faced by the Blake family at the center of Stephen Karam’s 2019 Pulitzer Prize- and Tony Award-winning comic drama, The Humans, now onstage at the Chatham Playhouse.

This particular Thanksgiving takes place at the run-down Manhattan duplex apartment in Chinatown shared by aspiring musician Brigid Blake and her boyfriend Richard. Brigid's parents, Erik and Deirdre, have arrived from their home in Scranton, Pennsylvania, along with older daughter Aimee, a lawyer living in Philadelphia who has recently broken up with her girlfriend and has developed an intestinal ailment. Also present is Erik's mother Fiona, called "Momo," who has Alzheimer's disease. Over the course of the day, Erik and Dierdre express their unhappiness at their daughters’ leaving home, abandoning their Catholicism and leading “untraditional lives.” As the dinner progresses, the family deals with aging, illness and a changing economy, the latter of which has left the blue collar Blakes in dire financial straits. (Above, Emily Miller, Sarah Pharoan, Jeff Maschi, Noreen Farley, Matt McCarthy and Marguerite Wurtz)

Karam’s finely drawn characters are, above all, human beings, with all their hopes, dreams and disappointments. Superbly directed by Chase Newhart, six talented actors portray their personas with wit, heart and sympathy. No one is a villain, nor is anyone an angel. Jeff Maschi (right) is angst personified, running his hands nervously through his longish hair and jumping at every noise produced by the Chinese woman who lives upstairs. It doesn’t help that he was in a nearby coffee shop when the Twin Towers fell—that the observation deck hadn’t yet opened saved his life, if not his sanity. 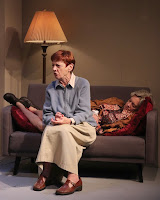 Noreen Farley as Dierdre picks at her daughter’s living conditions, much as any mother would at seeing this dark “duplex” apartment Brigid has rented. And her strict Catholic upbringing and faith leaves no room for cohabitation before marriage, as she makes clear several times during the day. Sarah Pharoan is superb as Aimee, grieving the loss of her girlfriend and suffering from intestinal distress. And Marguerite Wurtz’s portrayal of Momo (left, with Farley)has flashes of humor, along with the frustration engendered by caring for a dementia patient. Despite sleeping through much of the action, she’s very convincing!

That leaves the young couple, Brigid and Richard. Emily Miller is chirpy as Brigid, determined to impress her family with her ability to “make it” in New York, yet there’s an undercurrent of failure under that cheeriness. Trained as a musician, she’s working as a bartender. Post-college, she has left Scranton behind, forgetting her blue-collar antecedents so far behind that she is unaware of the effect that Richard has a trust fund will have on her “salt-of-the-earth” Irish parents. As for Richard, Matt McCarthy portrays him as a bit of a loser too, despite that trust fund: At 38, after a long bout of clinical depression, he’s gone back to school to study social work.

The emotional landmines hidden in that Chinatown apartment explode in Karam’s literate, witty (but not precious) script. Roy Pancirov has designed a two-story set (right) that mimics the one at the Roundabout Theatre, the play’s original venue. Drab walls, dankness, a treacherous spiral staircase echo the futility and sadness of the characters’ lives. Joe DeVico’s sound—lots of unexpected thuds and machine noises—further convey the emptiness of these people’s lives. Richard Hennessy and Fran Harrison are to be commended for atmospheric and appropriate lighting and costumes, respectively.

To Karam’s credit, the play doesn’t end “happily ever after.” We really don’t know what happens to these people; we just know that life is filled with success and failure, that events are many times out of our control. The courage shown by the Blakes and Richard lies in laying bare their souls and facing the demons that they face. To sum up The Humans in one word: This is one of the most honest plays I’ve seen in a long while. You have only two more weekends to see it.

The Humans will be performed at the Chatham Playhouse, 23 N. Passaic Ave., Chatham, through October 19. For information and tickets, call 973.635.7363 or visit www.chathamplayers.org online.