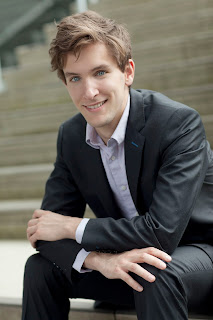 Bach and the Art of Dance

WHEN: Friday, October 18, at 7:30 p.m.
WHERE: Miller Chapel, located on the campus of Princeton Theological Seminary, 64 Mercer Street, Princeton
TICKETS: $25 for general admission and free to students with an ID.
They may be purchased at the door or online at http://www.drydenensemble.org.

The Dryden Ensemble will present organist Jacob Street in an all-Bach organ recital.

Like many composers of his time, J. S. Bach appreciated the fine art of the dance: in a luscious French sarabande, a lively English jig or a breathless Italian corrente.

The program opens with one of Bach’s organ works from the early Weimar years requiring virtuoso alternate-toe pedaling, the spirited Prelude and Fugue in D Major, BWV 532. The Trio Sonata in E Minor, BWV 528 follows, an example of chamber music for one person, in which the three parts are played by the right hand, the left hand and the feet respectively. After a set of chorale preludes is Bach’s Passacaglia and Fugue in C Minor, BWV 582, which many consider to be Bach’s greatest work for keyboard. The composer Robert Schumann once described the variations in the Passacaglia as “intertwined so ingeniously that one can never cease to be amazed.” The concert closes with two chorale preludes, Allein Gott in der Höh' sei Ehr, BWV 662 and In dir ist Freude, BWV 615.

Jake Street is an organist, harpsichordist, choir director, and advocate. He is a prizewinner in several international organ competitions and holds multiple degrees in keyboard performance, most recently from Yale University. He has studied with John Skelton, Arvid Gast, Thomas Murray, Webb Wiggins, Michael Fuerst, and Arthur Haas. Under the mentorship of Richard Webster, he served as Organ Scholar at Trinity Church, Copley Square from 2012-13. Jake spent the following year as a Fulbright Scholar, studying historical instruments and fine-tuning his German accent in Lübeck, Germany. He leads a semi-professional choir of adults and choristers as Director of Music at St. Paul’s on the Green in Norwalk, Connecticut, and is the accompanist for the Fairfield County Chorale.

The Dryden Ensemble’s 2019-2020 season continues on November 9 and 10 when the group will present A Baroque Tapestry, music from Lully to Bach for oboes, bassoon, strings, and harpsichord, including Bach’s Harpsichord Concerto in D Major. On February 16, lutenist Daniel Swenberg will perform a free concert, Three Centuries of Lutes. Capping off their 25th anniversary is an intimate production of Bach’s St. John Passion on March 13-15.