With the success of the film Judy, starring Renee Zellweger, and the opening of the Paper Mill Playhouse’s inaugural production, Chasing Rainbows: The Road to Oz, we can officially declare 2019 “The Year of Judy (Garland).”

Marking the 80th anniversary of The Wizard of Oz, the musical (book by Marc Acito) chronicles the early life and career of one Frances Gumm of Minnesota who went on to become Judy Garland֫—the film’s star and a subsequent American icon. That it does so with familiar melodies (some of them given new lyrics by Tina Marie Casamento), inventive and energetic choreography, and terrific pipes on the part of the actors makes Chasing Rainbows a must-see addition to the theater scene and a worthy candidate for a Broadway production. 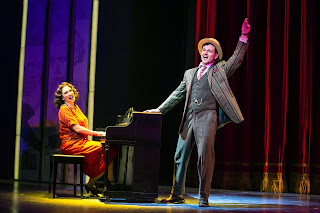 Born to minor league entertainers and small-town movie theatre owners Frank and Ethel Gumm (Left: Lesli Margherita and Max Von Essen) and facing dire financial straits, the three Gumm sisters and their mother travel west to Hollywood with an eye to their landing film contracts and roles in the new cinema form: talking motion pictures. Their hopes are pinned on the talents of “Baby” Frances, a little girl with an outsized voice. Unfortunately, moguls like Louis B. Mayer are seeking “beautiful girls” for their

films, whether they can act or not. This means that a rather plain teenaged Frances (re-named “Judy Garland” by comic George Jessel; right, Ruby Rakos) is subjected to unkind, harsh comments about her looks and administered a raft of increasingly strong amphetamines to help shed her childlike pudginess, along with barbiturates to help her sleep at night—actions that led to her addictive behavior later in life. But Judy is feisty: Threatened with losing the role of Dorothy, she learns to modulate the volume of her voice and refuses to wear the curly blonde wig and frilly dresses designed for her character, convincing Mayer that she, a plain, ordinary girl from the Midwest, is the very personification of the little farm girl who travels “over the rainbow” to follow the yellow brick road to Oz.

The show clocks in at two hours 20 minutes, a tad long for Broadway, but Director Denis Jones keeps the action moving along smartly, despite 33 songs, 19 in Act I and 14 in Act II! While the script could be tightened up by omitting some less important numbers, his crackling choreography, performed by terrific dancers, maintains the high energy level. 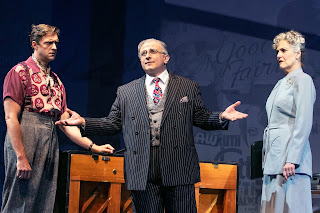 That he’s assembled a very talented cast resounds to Jones’ credit; it helps that several have been with the musical since its conception, appearing in productions at Flat Rock Playhouse and Goodspeed Opera House. Ruby Rakos is superb as Frances/Judy. Without imitating the real Judy, she convinces us who she is through similar musical phrasing. When she stands up to Louis B. Mayer (a pompous Stephen DeRosa; above, center, with Colin Hanlon and Karen Mason), we want to cheer. And the moments with her dad Frank (played with sympathy and heart by Max Von Essen) are particularly tender and a welcome respite from the high energy production numbers. 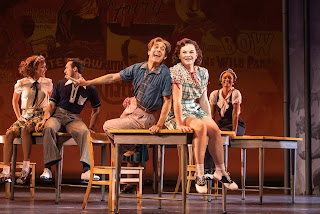 Lesli Margherita’s Ethel Gumm is not as pushy as Mama Rose (Gypsy), but she’s willing to do anything, even endanger her daughter’s health, to attain success. In contrast, Karen Mason as Mayer’s powerful secretary Kay Koverman provides Judy with the security she needs by supporting the teen’s point of view, and Colin Hanlon as voice coach Roger Edens gives her confidence and sound advice she relied on for the rest of her career. Another of the show’s veterans, Michael Wartella (Above, right, with Rakos), captures the spark and verve of a young Mickey Rooney (Joe Yule), and, boy, he can sure dance!

The rest of the ensemble is equally as fine. Charmers include Sophie Knapp as an adorable (and loud) Baby Gumm, while Violet Tinnirello brings down the house as a very perky Shirley Temple. 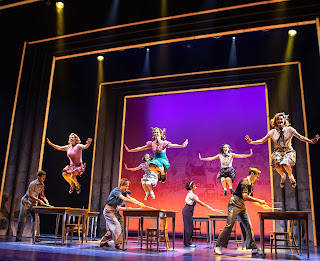 Production values, as usual, are superior. Alexander Dodge’s scenic design takes us from Minnesota to Antelope Valley CA to Hollywood in the wink of an eye. Linda Cho’s costumes are eye-popping and appropriate to character and action; Japhy Weideman’s lighting fits the various atmospheres very well. Matt Kraus’ sound is very loud; with everyone miked, your ears can sometimes hurt. Modulating the sound would go a long way to creating more nuance than the show has. 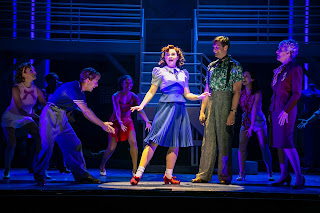 Chasing Rainbows. Isn’t that what every would-be entertainer does to secure the dream of stardom? Judy Garland caught hers in The Wizard of Oz, although the fruits of that success weren’t always what she thought they would be. The cruelty of the casting system left its mark on her psyche for the rest of her life, but her rather plain looks led her to develop her acting skills and musical delivery. She went on to enrich our lives with her musical performances, so it’s very interesting to learn more about how she got there. Chasing Rainbows: The Road to Oz is both enlightening and entertaining, an original piece of musical theater worthy of the venerable Paper Mill Playhouse. See it before it hits The Great White Way! (Above, right: Wartella, Hanlon and Mason admire Rakos’ ruby slippers)

Chasing Rainbows: The Road to Oz will be performed through October 27 at the Paper Mill Playhouse, 22 Brookside Dr., Millburn, NJ. For information and tickets, call the box office at 973.376.7676 or visit www.PaperMill.org online.