LSO OPENS SEASON WITH MUSIC THAT WILL WARM YOUR SOUL 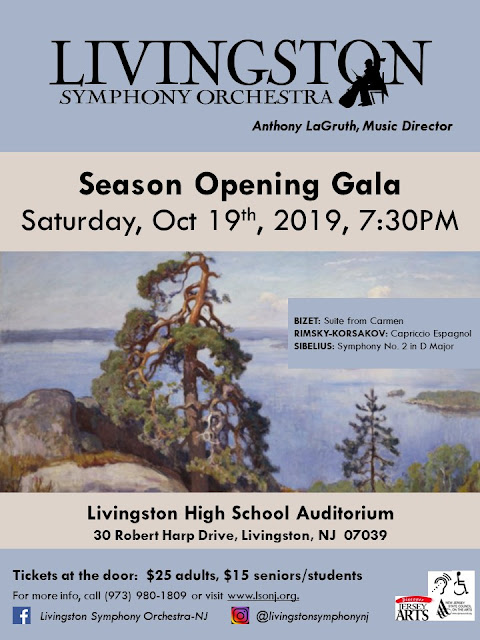 The program, from sunny Spain (Bizet’s “Carmen” and Rimski- Korsakov’s “Capriccio Espagnol”), to frozen Finland (“Sibelius Symphony No.2), will truly warm your soul.

The concert opens with excerpts from Bizet’s “Carmen,” one of the most popular and oft performed operas of all times. The opera is a melodramatic story of love and murder set in Spain, with characters including soldiers, gypsies, smugglers and bullfighters, all depicted with finesse by the composer. “Carmen” was very different from previous operas that were based on mythology or morality plays, and it was initially rejected by French audiences. Unfortunately, Bizet died three months after the opera’s debut at age 36, calling “Carmen” a “definite and hopeless flop.” The opera went on to a rapturous reception in Vienna and throughout Europe, and remains among the top three operas performed today (along with “Aida” and “La Boheme”).

The concert continues with Rimski-Korsakov’s “Capriccio Espagnol,” a five movement suite based on Spanish folk melodies. Originally planned as a showcase for violin and orchestra, the work evolved to feature many solo players and be described by the composer as “glittering with orchestral color.” Featuring a large percussion section, the piece exemplifies the Spanish countryside in all of its heat and gypsy flavor. Solo cadenzas and fragments can be heard from the violin, flute, clarinet, harp, horn and harp, and in the “Fandango” Andalusian Dance movement, every section takes its turn leading the orchestra.

After intermission and a chance to meet and greet musicians, the concert concludes with Sibelius’ “Symphony No.2.” Sibelius’s music has been described as both nationalistic and also reflective of the bleak Finnish landscape, replete with forests, birds, and lakes. Written partially in Italy, some scholars have speculated that the symphony’s second movement described a struggle with Don Juan and the devil, a “confession of the soul” per the composer. The symphony is also viewed as four atmospheric tone poems based on the rich mythology of Finland. Regardless of interpretation, the intense and dramatic closing tune of this piece is just superb.

The orchestra is led by knowledgeable and approachable Maestro Anthony La Gruth, on hand to provide further insight in what promises to be an exciting program. For more information, call (973)980-1809 or visit www.lsonj.org or Facebook: Livingston Symphony-NJ.