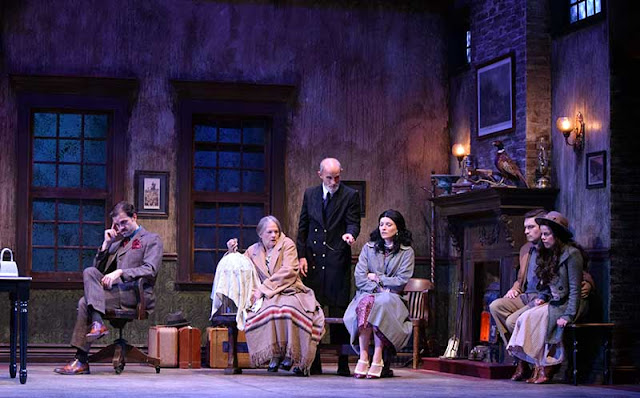 Ghost Train starts out like your average thriller: six people stranded in a rundown railroad station on a rainy night, a perfect formula for scary, but it takes as many zigs and zags as a switchback track. (Above, left to right; Peter Kendall, Caroyln Popp, David Sitler, Campbell Symes, CJ Carter & Sarah Giacomini. Photo credit: Chris Young).

The Centenary Stage Company production’s opening night, Friday, Oct. 4, used the actors, the set and special effects to create the proper amount of spookiness, as well as some humor.

Of the six characters there is a couple on their wedding night, a couple on the verge of separating, a single woman of a certain age with a parrot and a rather odd young man with a long scarf and longer stories. Expectedly, the station master tells a scary story of a train accident 20 years ago that very night, Friday the 13th (of course).

Events ramp up the tension until Miss Bourne (she of the parrot) becomes hysterical and partakes of some (more than some) brandy proffered by Teddy Deakin (the odd young man). With Miss Bourne out for the count, the other five start experiencing things the station master warned them about. Other characters appear, and may or may not be who they say they are.

The play, written by Arnold Ridley in the 1920s, is a clever example of the thriller genre with a healthy dose of humor built in. Some of the audience laughter is of the nervous variety, but the cast keeps a delicate balance between humor and comedy.

The production was directed by Carl Wallnau, founding director of the Centenary Stage Company and chair of the fine arts department at the university. He used the set and special effects as characters in the story. The dingy station and the lights and sounds that represented the ghost train were right on. Centenary’s sets are well known for their utility and cleverness, but this one is excellent even by those standards. 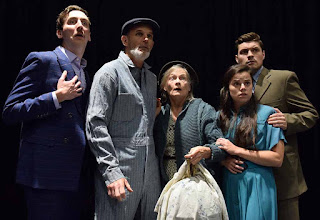 As usual with Centenary, the cast was superb. Justin Pietropaolo as Teddy handled the twists and turns of the character with ease. The couples, played by Peter Kendall and Campbell Symes and CJ Carter and Sara Giocomini, were perfect 1920s young marrieds. Stationmaster David Sitler was appropriately creepy, and Miss Bourne Carolyn Popp appropriately annoying.

Lauren T. Mack appears in the second act as the mysterious and possibly crazy Julia Price. She does a great job in a tough role, but perhaps the blonde wig could be toned down a bit.

The other speaking parts are Michael Irvin Pollard as Herbert Price and Craig MacDonald as John Sterling. They did a fine job of being people who were not as they first seemed.