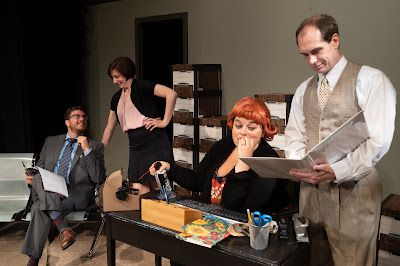 The Receptionist
by Adam Bock
Directed by Michael Smith-Gallo (Montclair)

At the start of a typical day in the Northeast Office, Beverly deals effortlessly with ringing phones and her colleague’s romantic troubles. But the appearance of a charming rep from the Central Office disrupts the friendly routine. As the true nature of the company’s business becomes apparent, The Receptionist is The Office meets The Twilight Zone, and raises disquieting, provocative questions about the consequences of complicity with evil.

The Receptionist is a one-act office comedy, which debuted in New York in 2007, and gives a chance for Studio to showcase smaller, more intimate pieces with its audiences.