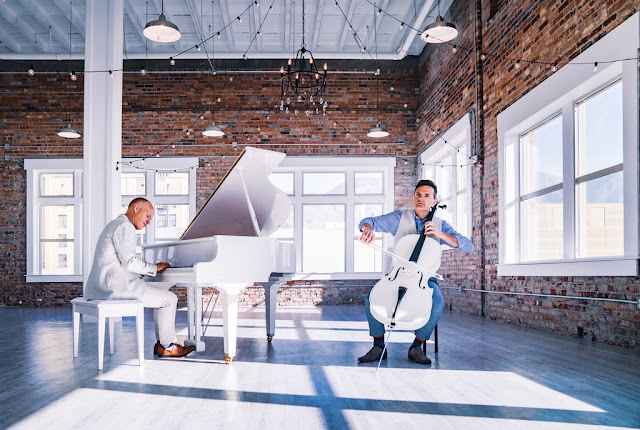 WHEN: Tuesday, September 10, 2019, 8pm
WHERE: State Theatre, 15 Livingston Ave., New Brunswick
TICKETS: $49-$199
For tickets, more information, or group discounts, call State Theatre Guest Services at 732-246-SHOW (7469), or visit us online at STNJ.org.
State Theatre Guest Services, located at 15 Livingston Ave, New Brunswick NJ, is open Monday through Friday from 10am to 6pm; Saturday from 1pm to 5pm; and at least three hours prior to curtain on performance dates unless otherwise specified. Additional ticket and transaction fees may apply.

The Piano Guys became a sensation after releasing a series of original music, mixing classical music with pop. Now, the group is delighting live audiences with their blend of classical and pop music as they embark on a 2019 fall tour.

Joining The Piano Guys on stage for a section of the performance will be eight violinists from The Youth Orchestra of Central Jersey (YOCJ). The YOCJ features 17-year old Annabel Guo and 15-year-old Sonya Jin, from Plainsboro; 17-year-old Lakshay Patel, 16-year-old Anika Kapoor, 15-year-old Vivian Chen, and 14-year-old Ireanne Cao from West Windsor; Luna Lee, 17, from Robbinsville; and Laura Liao, 16, from Princeton.

“YOCJ is so thrilled that The Piano Guys are providing a unique opportunity for eight of our violinists! I really admire how The Piano Guys cleverly combine well-known classical themes with familiar melodies from movie scores and pop music,” says YOCJ Executive Director Larisa Epps.

About The Piano Guys

The Piano Guys were officially formed in 2011 and are based in Southern Utah. The fathers who make up The Piano Guys are Jon Schmidt (pianist, songwriter), Steven Sharp Nelson (cellist, songwriter), Paul Anderson (producer, videographer), and Al van der Beek (music producer, songwriter). Since their formation, they have delivered bold compositions that transcend boundaries of style and genre.

In the past eight years, The Piano Guys have released five studio albums, two Christmas releases, and a live album. They have earned six number one debuts on Billboard’s Top Classical Albums chart, over two billion global streams, over 1.6 billion YouTube views, and nearly two million monthly listeners on Spotify alone. They have had sold out concerts all over the world and they have attracted an international audience. The Piano Guys have appeared in The New York Times, Fast Company, BuzzFeed, Mashable, and People. Some of the significant programs The Piano Guys have been featured on are The TODAY Show, Good Morning America, and The Tonight Show.

In late 2017, they hunkered down at their own TPG Studios in Utah and commenced work on what would become their 2018 album, Limitless. A sublime, soaring, and sweeping cover of Ed Sheeran’s “Perfect” teased out the forthcoming project, generating over eight million Spotify streams, and nearly 20 million YouTube views. Moreover, the crossover of The Chainsmokers’ “Something Just Like This” (feat. Coldplay) and Franz Liszt’s “Hungarian Rhapsody No. 2” further illustrated their skill for masterful mash-ups.

Limitless shares an important message. The Piano Guys hope to transfer the feeling of being limitless to its listeners with this album. As a mission of The Piano Guys, they hope to be spokesmen of hope and faith. They want their listeners to feel like they can get up and conquer the world. They hope to get people excited about their own capabilities.

About the Youth Orchestra of Central Jersey

Since 1978, the Youth Orchestra of Central Jersey brings together some of the finest young musicians in our region to participate and excel in a nurturing and challenging musical environment. Over 200 elementary through high school students, all of whom take private lessons and participate in their schools’ music programs, make up its 14 performance groups. YOCJ.org