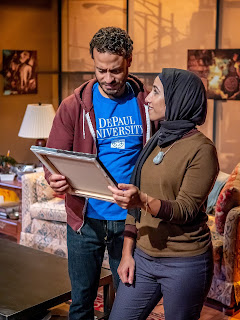 Some pieces of jewelry, passed down through the generations, carry with them familial history and stories of those who wore them. Other jewelry, given to mark milestone celebrations—say, the birth of a child or an engagement—remind us of those seminal events whenever we look at them. And still other pieces of jewelry carry with them all of the above—along with not-so-happy memories that haunt us with fraught recollections we cannot escape. The eponymous necklace at the center of Rohina Malik’s play, Yasmina’s Necklace, now receiving its New Jersey Premiere at Kean University’s Premiere Stages, where it runs through September 22, matches the latter description.

Previously presented at the 16th Street Theater (2016) and Goodman Theatre (2017) in Chicago, Yasmina’s Necklace tells the story of Abdul Samee, son of an Iraqi father and Puerto Rican mother, and Yasmina, a refugee who, along with her father Musa, has escaped war-torn Iraq to immigrate to Chicago. (above, Cesar J. Rosado and Layan Elwazani)

Scion of a prosperous middle class family and longing to be accepted by American society, Abdul Samee has changed his name to Sam and married (and divorced) an American woman. Newly arrived Yasmina clings to her homeland and culture, carrying a jar of soil from Iraq, refusing to shed her hijab and name to become “American,” and wearing a necklace with a large stone inscribed with “IRAQ.” The couple’s ensuing arguments over the importance of the past get in the way of their arranged courtship, threaten to derail their budding personal relationship and provide the tension that keeps the audience wondering what will happen next.

On a versatile set designed by David M. Barber, Malik’s plot unfolds in four locales: Sam’s parents’ well-appointed dining room, Yasmina’s rather run-down living room, the local mosque, and flashbacks to Iraq and Syria (harrowingly indicated by Cha See’s atmospheric lighting design). While Director Kareem Fahmy adeptly keeps the action moving smoothly from location to location, the second act drags a bit, increasing our impatience to discover what really haunts Yasmina and what will happen between the two protagonists.

Playwright Malik is to be commended for her skill at writing natural-sounding dialogue, letting details come to light bit by bit, and creating two attractive, wholly believable main characters—all while leavening the tension with comic relief that never feels false or forced. Cesar J. Rosado and Layan Elwazani  turn in stellar performances as Abdul “Sam” Samee and Yasmina, respectively. A bit of a know-it-all, he projects the modern cynical attitude toward the arranged marriage favored by his parents; married and divorced from Tracey, he’s considered an inappropriate mate for a good Muslim girl. Elwazani’s Yasmina, a “magnet for trouble” and self-proclaimed “abnormal,” is equally unsuitable as a mate and comes across as a soul tortured by her experiences in Iraq and Syria, along with some unknown events in her past. That the two young actors convey a growing chemistry speaks to their talent and thorough inhabitation of their characters. 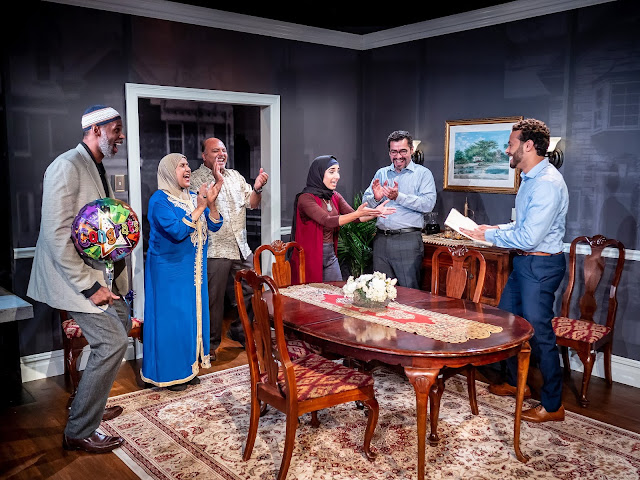 In contrast, Eliud Kauffman and Socorro Santiago as Sam’s parents are less convincing. Santiago’s shrill delivery sounds rehearsed; Kauffman’s stiff demeanor and delivery turns him into a caricature of an Old World father bewildered by his young son’s decisions. Haythem Noor’s depiction of Yasmina’s father Musa is warmer; just watching him fawn over Sam’s parents points up the dilemma of the refugee attempting to ingratiate himself into the those who preceded him. Interestingly, Robert Manning, Jr.’s stature and delivery as Imam Kareem recall basketball great Kareem Abdul Jabbar! He mines the poignancy of his difficulty persuading the community that he, a Black Muslim, was qualified to assume their leadership. And Peter Romano’s mysterious Amir (below, left, with Elwazani) made the most of the little he has to do. A nice directorial touch is that, when conversing with Sam and his parents, Yasmina sports an accent, yet, when speaking to Amir and various antagonists in Arabic, she has none. (Above L-R) Robert Manning Jr., Socorro Santiago, Haythem Noor, Layan Elwazani, Elid Kauffman and Cesar J. Rosado) 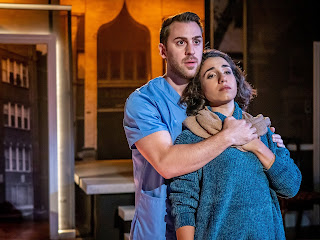 Inspired by a real necklace and her friend, a Latina Muslim married to an Arab, Rohina Malik has written a timely and compelling play about two attractive and vulnerable people who, as Premiere Stages’ producing artistic director John Wooten so succinctly put it, “contemplate the lessons of the past as they navigate their worlds toward a better tomorrow.” By the time the lights go down for the last time, we really care about Sam and Yasmina, thanks to Malik’s fine writing and Rosado and Elwazani’s splendid performances. That Malik doesn’t give us a pat answer (no spoilers here to detract from the suspense permeating the play) is indicative of a playwright in touch with and in control of her material.

Yasmina’s Necklace shows what often happens to refugees to America, haunted by their past as they attempt to establish a new life. Malik has created characters who are not anonymous members of a “caravan” attempting to get into our country; in the aftermath of America’s invasion of Iraq and the ensuing war, they have been granted asylum. Their plight illuminates what it means to be Muslim in America after 9-11 and reminds us that their tale is in many ways universal, for our own ancestors probably encountered the same challenges as they attempted to fit in.

Yasmina’s Necklace will be performed at Premiere Stages in Bauer Boucher Theatre Center on the Kean University main campus, 1000 Morris Avenue, in Union, through September 22. Imam Sohaib N. Sultan, Chaplain of Princeton University, will conduct a post-performance talk back on Saturday, September 21. Premiere offers a series of informal pre-show talks 30 minutes before every Saturday evening performance in the theater lobby. For information and tickets, call the box office at 908.737.7469 or visit online at www.premierestagesatkean.com