REVIEW: STNJ’S “AS YOU LIKE IT” FAILS TO SATISFY MY APPETITE FOR COMEDY

Visually stunning, swirling with color and texture, and crisply acted. With production values like these, why does the Shakespeare Theatre of New Jersey’s current production of As You Like It fail to satisfy? Last performed on the outdoor stage in 2014 and on the Main Stage in 2005, this long, convoluted tale featuring two sets of warring brothers, good folk being exiled to a forest and a couple struggling to find true love contains some of Shakespeare's most poetical and insightful writing and one of the best roles for a woman. So why didn't I like it?

As You Like It follows the lovely Rosalind who, accompanied by her cousin Celia and the court fool Touchstone, flees her uncle's persecution to the Forest of Arden. Similarly, a young gentleman of the kingdom, Orlando, escapes his evil brother Oliver's persecution, accompanied by Adam, his faithful elderly servant, to hide in the same forest. To complicate matters, before fleeing, Rosalind and Orlando fall in love at a wrestling match in the ducal court; things really get crazy when the two meet again at the camp where the usurped Duke (Rosalind's father) lives with a band of loyal lords. There, Rosalind, disguised as a male youth named Ganymede, instructs Orlando, now madly writing goofy love poems to Rosalind and posting them on trees, how to woo his lady—in this case, herself! Similar wooings among dimwitted shepherds (and Touchstone) are tempered by the melancholic musings of the dour courtier, Jaques. In the end, all gets sorted out, and multiple simultaneous weddings bring the mayhem to a happy close. 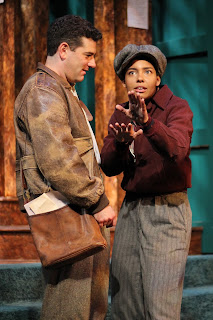 So what's not to like? The conceit of a woman disguised as a man is common to several of Shakespeare's plays, but a tiny bit of the woman’s femininity is usually visible under the male clothing—making the clueless Orlando's wooing of Ganymede all the more delicious, for we are in on the joke. In this production, director Paul Mullins and costume designer Nikki Delhomme have dressed the characters in colorful, modern attire, except for Safiya Kaijya Harris (left with Ben Jacobs), who plays Rosalind. When we first meet her at the ducal palace, she wears a lovely burgundy cocktail dress. In the forest, however, she’s donned tweed men’s trousers, work boots, a blazer and a knitted watch cap pulled down over her ears, hiding any hint of femininity. Even more confusing is her donning of a male persona, complete with fist bumps and swagger; where we should see a young woman trying too hard to be manly, she’s too convincing. And her speech fits her appearance; even as she recites Shakespeare's lovely lines, I kept waiting for her to break into Rap. Sometimes, she sounded more like a kid from the 'hood, instead of a well-brought-up, lovely lady trying to connect with her beloved. 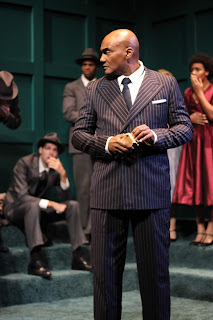 The rest of the cast have no such problems. In fact, several of them double in roles both masculine and feminine. Torsten Johnson is a malevolent, nasty Duke Oliver who tortures his younger brother Orlando by withholding from him any learning or activity that would bring him pleasure; he's also Sir Oliver Martext, the lisping minister Orlando has found to marry him and Ganymede/Rosalind in the forest. Earl Baker, Jr., plays the two dukes: cruel, usurping Duke Frederick (in a no-nonsense pin stripe suit, right) and his kindly brother Duke Senior, whom he has banished from his realm. Roger Rathburn plays the loyal servant Adam and the simple shepherd Corin. And Jonathan Higginbotham wins the prize for the most roles played: He's Charles the wrestler; the lovestruck shepherd William; and a forester. Devin Conway plays the male servant Le Beau and Phoebe, a sassy shepherdess in love with Ganymede and pursued by the steadfast Silvius, played by an earnest Ryan Woods. Elizabeth Colwell gets great laughs for her portrayal of the doltish Audrey, who’s won the heart (for a while, at least) of Touchstone the Fool. 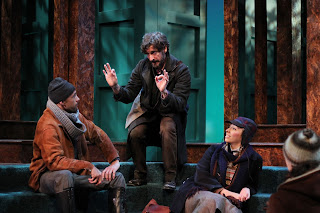 The actors who play only one part are equally as fine: Ben Jacoby, coming off a three-year run in Broadway’s Beautiful, is winningly attractive as the almost too-good-to-be-true Orlando; he is especially funny when reciting the doggerel he has written to extol his Rosalind's beauty. Nick Corley’s Touchstone, the wise fool, whose motley consists of a vivid plaid shirt, delivers his lines with a wise guy attitude; his great height and stature add to the hilarity of his role, and his expressive face makes his jokes seem like grand philosophical statements. And Anthony Marble (above left, center) as the dour melancholic Jaques is not shy about voicing his distaste for the rustic life and a nagging cynicism; his recitation of the famous and familiar "All the World's a Stage (Seven Ages of Man)" speech is masterful, and he is a great foil to the almost cloying idyllic forest life. 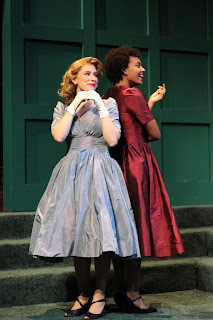 The aformentioned Safiya Kaijya Harris (right) has the makings of a fine actress, although I believe that Director Mullins has done her portrayal of Rosalind no favors with his choices. Under that cap, it is hard to see the womanly ardor she should attempt to control in the company of Orlando. She's terrific in the opening scenes, regal and cool. As her confidante-cousin, the rather clueless Celia, Sarah Nicole Deaver (right) performs well in a role that takes a back seat to Rosalind; she looks appropriately bored as her cuz extols Orlando's qualities ad nauseum, so that when she falls in love with a now-reformed Oliver, we are glad for her happiness.

Brittany Vasta’s versatile set takes us from the French court, with its two perpendicular coffered walls, to a leafy forest, complete with lots of tree trunks behind which to hide and a shed covered with flowered panels. I don’t know who composed the original music to accompany Shakespeare’s words, but they weren’t very melodic. When the forest troubadour sings, “Then, heigh-ho, the holly! This life is most jolly,” he sounds more melancholic than celebratory. Rick Sordelet has staged raucous, realistic wrestling matches between Orlando and Oliver and Orlando and Charles that get the play off with a bang.

As You Like It was written in 1599 and then disappeared from the Elizabethan stage. Only in the 17th century, when women began to act onstage, was the play re-discovered and enjoyed a renaissance. Yes, the plot is complicated, and yes, we have to suspend our disbelief, but the play contains some of Shakespeare's loveliest poetry and sharp insights into human nature. I just wish I hadn't felt "hungry" after the stage lights went down.

As You Like It will be performed at the F.M. Kirby Shakespeare Theatre, 36 Madison Ave., Madison (on the Drew University Campus) through September 22. For information and tickets, call the box office at 974.408.5600 or visit www.ShakespeareNJ.org online.