WHEN: now through December 12. Gallery Hours: Monday - Friday 10 a.m. – 4 p.m. Admission is free and open to the public.
WHERE: The Karl and Helen Burger Gallery at Kean University, CAS Building, 1000 Morris Ave., Union
ADMISSION: open to the public
For more information: www.kean.edu/kean-galleries, email galleries@kean.edu or call (908) 737-0392. 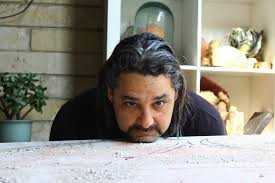 Duda Penteado has lived in both the United States and Brazil for more than 20 years. His multidisciplinary work is based on performances, videos, installations, murals, sculptures, paintings, and other visual projects. He has dedicated much of his work to issues related to peace, globalization, dual citizenship and other geopolitical and social problems of the 21st Century. He is known for pushing the boundaries of the status quo in order to improve society through the power of art. (Top: Duda Penteado: Beauty for Ashes)

Penteado’s work has been exhibited at galleries and museums throughout the United States and Brazil, as well as in Europe.

“Duda Penteado creates artwork that provokes us to think about issues in our social and personal world — the work is visceral and visually engaging,” said Director of Kean University Galleries Neil Tetkowski. “The installation includes sculptures made of real bones as well as high-tech video. His creative vision literally cross-fertilizes primal imagery with modern culture, provoking us to question our own personal values and the values of a conflicted yet sophisticated society we all depend on.”

The Burger Gallery exhibition will include a viewing room for Penteado’s documentary film entitled How Many Lives, in which he exposes how gun violence has affected a group of young people in Jersey City and across the nation. To explore this issue, the artist directed the creation of a 180-foot mural painting with the participation of young people who have been directly or indirectly affected by this type of violence. The painting of this mural is the subject of the film.