REVIEW: STNJ’S “THE RAINMAKER” WINNINGLY REMINDS US OF THE POWER OF DREAMS 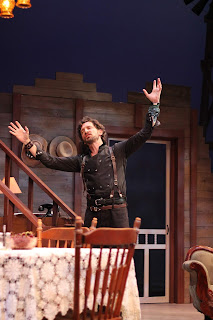 Rain isn’t the only thing in (very) short supply in R. Richard Nash’s drama, The Rainmaker. Indeed, a dearth of something even more important has affected the motherless Curry family, hope, and it takes a smooth-talking, sexy con man to fill this basic need.

Perhaps it’s because we’ve got climate change and weather on our minds, what with hurricane season upon us; tornado-strength winds downing trees and wires; and the recent deluges that have caused flash flooding, or it may be the incredible chemistry between the seven actors, but the Shakespeare Theatre of New Jersey’s second Main Stage production of the season is a real winner.

The plot of the play is fairly straightforward. In an unnamed Midwestern town during a long drought, farmer H.C. Curry worries about his crops and cattle, but even more on his mind is his unmarried daughter Lizzie, who is rapidly approaching spinsterhood. When a handsome stranger named Starbuck (Anthony Marble, above right) unexpectedly turns up, claiming the ability to produce rain for a fee, H.C. takes him up on his offer. But the only storm Starbuck manages to unleash is in Lizzie, who falls for him hard and awakens to the possibility of romance in her life for the first time. 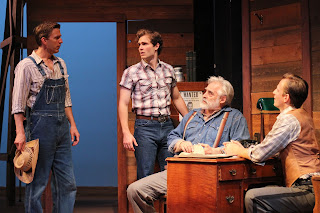 Bonnie J. Monte, The Shakespeare Theatre of New Jersey’s Artistic Director, works her magic on this rather old-fashioned drama. Mark Elliot Wilson’s portrayal of H.C. takes a while to get off the ground; at first, he looks a tad too detached and amused at the ill humor of his older son Noah, played by Benjamin Eakeley with a judgmental self-righteousness, snarl and swagger that barely mask a desperately unhappy man. It isn’t until Noah tells Lizzie to her face that she’s plain that Wilson’s parental outrage over Noah’s treatment of his sister and his younger brother Jim catches fire. Galloping around the stage like a young stallion in search of a mate, Isaac Hickox-Young’s Jim is the epitome of adorable youthful exuberance. (Left: Benjamin Eakeley, Isaac Hickox-Young, Mark Elliot Wilson and Corey Sorenson) 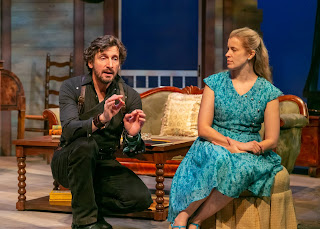 Monette Magrath is convincing as Lizzie, smart, sensitive and, yes, “plain as old shoes”—a young woman “afraid of being beautiful,” according to her doting father. Her body language conveys the defeat and disappointment felt by a woman unable to fulfill the role society thinks she should play, although there doesn’t seem to be anyone in town to match her intelligence and wit. Even the deputy sheriff File, ably played by Corey Sorenson as a commitment-phobic, lonely loser, doesn’t seem to be interested in her charms and abilities. The entire situation is a bummer for all characters involved. 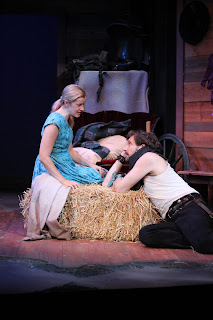 However, when handsome Anthony Marble (left, with Magrath) appears as the con man Starbuck, the air crackles with electricity. Sexy, seductive, Marble charms everyone, even the audience, and it’s easy to see why even the dour Noah grudgingly goes along with the scheme to produce rain. And his love scenes with Magrath are electrifying and natural. Nick Plakias rounds out the cast as the no-nonsense Sheriff Thomas.

Monte’s realistic set uses the entire stage, breaking it into three different venues, the largest being the Currys’ house. Beyond overalls and sheriff uniforms, Hugh Hanson manages to make Magrath look positively dowdy as Lizzie, and that’s no mean feat! Steven L. Beckel has chosen appropriate banjo music to help set the scene. Kudos go to Matthew J. Weisgable’s lighting that signals the passage of time; the yellowish sky at the end of the play is most appropriate for the oncoming storm.

Since its premiere in 1954, The Rainmaker has been translated into 40 languages; a 1956 film starred Burt Lancaster and Katherine Hepburn, and a 2000 revival starred Woody Harrelson as Starbuck, but these versions have nothing on the current production at The Shakespeare Theatre of New Jersey. The storm raging on the Curry farm will open your heart’s floodgates to accept the power of love and the possibilities of romance, turning us all into dreamers. And, isn’t that what theater is supposed to do?

The Rainmaker will be performed at the F.M. Kirby Shakespeare Theatre on the Drew University campus, 36 Madison Ave., Madison, through August 18th. For information and tickets, call the box office at 973.408.5600 or visit www.ShakespeareNJ.org online.