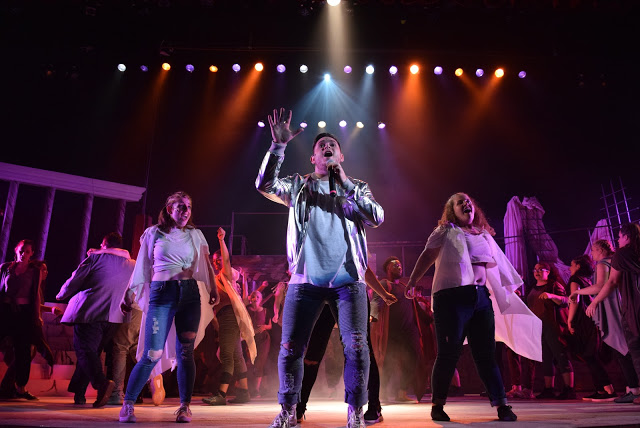 The very talented cast she has assembled are mostly college students who sing and dance at a level far beyond their years. Many could easily transition to the professional stage, particularly the leads. CJ Carter as Jesus, Stephanie Rosario as Mary Magdalene, Ryan Robert Washington as Judas and Kevin Wehrhahn as Pontius Pilate. Also impressive are Jonathan Drayton as Caiaphas, Allan Marchioni as Annas, Cody Jackson as Peter, Jesse Bush as Simon, Na’Jee Tariq as King Harold and a talented 25 member Ensemble who sing and dance with remarkable enthusiasm. Dare we say they sing like angels (he didn’t really say that?).

The story, presented with little spoken dialogue, centers on the last days of Christ as largely seen through the eyes of Judas, who opposes the direction Jesus is taking his followers. The staging of the Last Supper and the Crucifixion are particularly effective. 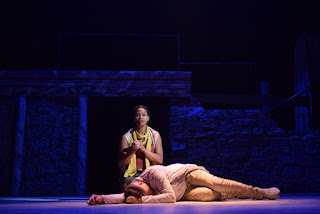 The musical highlights include the now pop standard “I Don’t Know How to Love Him” beautifully sung by Stephanie Rosario (Mary Magdalene, left). “Pilate’s Dream” delivered nicely by Kevin Wehrhahn (marvelous voice), Na’Jee Tariq (King Herold) has fun with “Herod’s Song”, CJ Carter and the ensemble with “What’s the Buzz,” and the rousing, “Superstar” with Ryan Robert Washington. 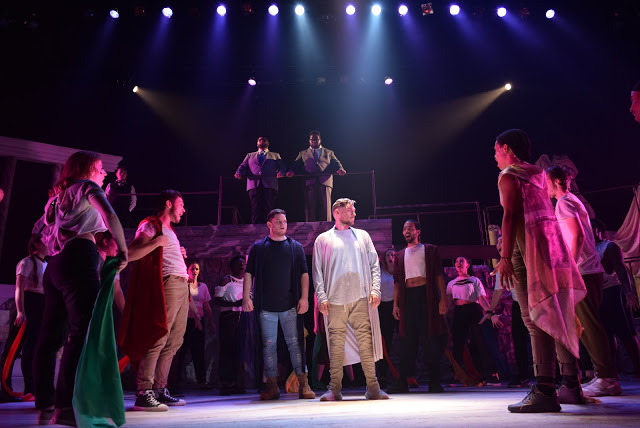 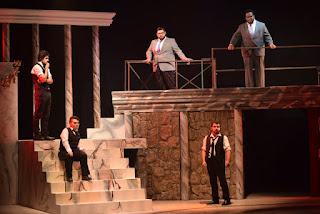 The play is two hours including one intermission. The performers are miked.

For more information or to purchase tickets visit centenarystageco.org or call the Centenary Stage Company box office at (908) 979 – 0900. The box office is open Monday through Friday from 1 – 5 pm and two hours prior to every performance. The box office is located in the Lackland Performing Arts Center at 715 Grand Ave. Hackettstown, NJ on the campus of Centenary University.

Background: The musical opened on Broadway on 12 October 1971, The show closed June 1973 after 711 performances. The production received mixed reviews. The show was nominated for five Tony Awards, including Best Score, but won none. Lloyd Webber won a Drama Desk Award as "Most Promising Composer.”

The Broadway show and subsequent productions were condemned by some religious groups. Tim Rice was quoted as saying "It happens that we don't see Christ as God but simply the right man at the right time at the right place." Some Christians considered such comments to be blasphemous, the character of Judas too sympathetic and some of his criticisms of Jesus offensive. The musical's lack of allusion to the resurrection of Jesus has resulted in criticism similar to that of fellow musical Godspell, which also did not clearly depict the resurrection.
At the same time, some Jews claimed that it bolstered the anti-semitic belief that the Jews were responsible for Jesus' death by showing most of the villains as Jewish (Caiaphas and the other priests, Herod) and showing the crowd in Jerusalem calling for the crucifixion.