This year’s festival begins at noon with The Antoinette Montague Experience, a popular jazz and blues group from the metropolitan area. Born and raised in Newark, Antoinette is an award-winning vocalist who is a regular with New York City’s Jazzmobile and has performed all over the world including a tour for the U.S. State Department. She is also the CEO of Jazz Women to the Rescue Foundation, a nonprofit dedicated to providing musical instruments to underserved youngsters. Her band members include the world-renowned pianist Danny Mixon, explosive guitarist King Solomon Hicks, young saxophonist Benny Rubin Jr., multitalented bassist Melissa Slocum, multiple Grammy nominated drummer Bobby Sanabria, and the exciting tap dancer A.C. Lincoln.

At two o’clock, The Frank Vignola Trio takes the stage. Now recovered from a serious accident which threatened his career, Frank has returned to his genre-spanning jazz, joined by his guitar partner and 2018 Top Musician of the Year Vinny Raniolo and longtime bassist Gary Mazzaroppi. The jaw-dropping virtuosity of this group makes them popular everywhere they play.

Then at four, Rob Paparozzi’s Juke Joint will salute the anniversary of Woodstock which occurred over the weekend of August 15-18, 1969. Although he was too young to go to Woodstock

himself, Rob later toured as the lead singer for “Blood Sweat & Tears” and most recently travelled the world with the “Original Blues Brothers Band.” Considered by many to be one of the best harmonica players on the scene today, Rob has worked and recorded with musical icons such as B.B. King, Dr. John, Bruce Springsteen, and Phoebe Snow. His band includes John Korba on piano, George Naha on guitar, Sue Williams on bass, Warren Odze on drums, Tom Timko on sax, Max Morden on trumpet, on special guest Tom “Bones” Malone on trombone.

At six o’clock, the music turns to the blues with the Bernard Allison Group. Born in Chicago in 1965, Bernard Allison was first introduced to the blues by his father, the legendary guitarist Luther Allison. Bernard developed his chops with the Koko Taylor Blues Machine as well as the great Willie Dixon. A star abroad, Bernard saw his most recent CD hit the top of the blues charts in 2018. Because he was rained out due to last year’s deluge, he wanted to return this year and he will! 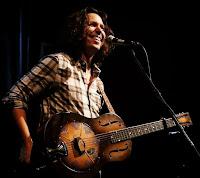 Also returning is blues guitarist Davy Knowles, who may only be in his early thirties, but has been turning heads with his mature playing. He has toured with Jeff Beck, Buddy Guy, The Who, Warren Haynes, George Thorogood, Joe Bonamassa, and Peter Frampton and is popular at festivals such as Lollapalozza, Bonnaroo, and Austin City Limits. He is praised by guitar greats such as Joe Satriani who proclaimed Knowles his “favorite modern bluesman” and Peter Frampton called him “the gunslinger guitarist of the 21st century.” Davy Knowles and his band take the stage at 8:00 PM.