WHERE: 91 University Place, Princeton, NJ 08540
TICKETS: All performances are currently available for single purchase or as part of McCarter’s various subscription packages. Tickets can be purchased online at mccarter.org, by phone at (609) 258-2787, or in person at the McCarter Ticket Office.

Ira Glass is the creator, producer & host of This American Life, the iconic weekly public radio program with millions of listeners around the world. Using audio clips, music, and video, Ira Glass delivers a unique talk; sharing lessons from his life and career in storytelling: What inspires him to create? What drives his passion? How have failures and successes informed his decisions? During his presentation, Ira Glass will mix stories live onstage and help his audience better follow the creative process of one of our foremost storytellers. 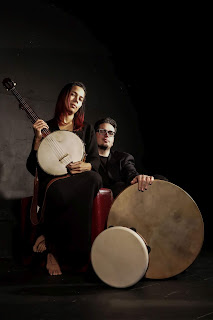 RHIANNON GIDDENS with FRANCESCO TURRISI
There Is No Other

Rhiannon Giddens is an American artist of folk and traditional music, played on fiddle and banjo; Francesco Turrisi is an Italian pianist and percussionist well versed in jazz, early music and Mediterranean music; at first blush, their worlds don’t overlap.

But at a chance musical meet-up in Ireland they found that her 19th century American minstrel banjo tunes and his traditional Sicilian Tamburello (tambourine) rhythms fit very naturally together.  They soon discovered the reason for that – their respective roots coexisted in the past. Pictures of early minstrel bands all represent banjo and tambourine (called tambo) together, where in many cases the tambo is held in the same manner of Southern Italian tamburello traditions today.

The massive effect that West African music and dance has had upon American culture is by now well known; but centuries before, European music was being transformed by Arabic and North African modes, instruments, and rhythms.  Working together they trace this musical globalism by reimagining the encounter of the banjo and the frame drum, and other instruments, through their journey from Africa, the Middle East, through southern Europe and England, and over to the Americas…. 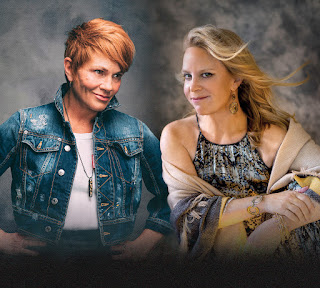 MARY CHAPIN CARPENTER and SHAWN COLVIN
Together On Stage

Mary Chapin Carpenter and Shawn Colvin—longtime friends for over 30 years— will appear on stage together as an intimate acoustic duo, swapping songs and sharing stories. This special concert will feature the acclaimed songwriters performing material from their vast catalogues as well as some of their favorite songs.

Claire Chase has reimagined the repertoire for the flute for over 23 years, proving that difficult music can delight. She is a soloist, collaborative artist, curator and advocate for new and experimental music. Over the past decade she has given the world premieres of hundreds of new works for the flute in performances throughout the Americas, Europe and Asia, and she has championed new music throughout the world by building organizations, forming alliances, pioneering commissioning initiatives and supporting educational programs that reach new audiences. She was named a MacArthur Fellow in 2012, and in 2017 was awarded the Avery Fisher Prize.

Her Princeton debut will feature the latest installation of her Density 2036 project. PAN is a 90-minute musical drama for solo flute, live electronics, and an ensemble of community musicians.

ROSEANNE CASH
She Remembers Everything

One of the country’s pre-eminent singer/songwriters, Rosanne Cash has released 15 albums of extraordinary songs that have earned four GRAMMY Awards and nominations for 11 more, plus a spot in the Nashville Songwriters’ Hall of Fame. She is also an author whose four books include the best-selling memoir Composed, which the Chicago Tribune called “one of the best accounts of an American life you’ll likely ever read.” Her essays have appeared in The New York Times, Rolling Stone, the Oxford-American, the Nation and many more publications. In addition to continual worldwide touring, Cash has partnered in programming or served as artist in residence at Carnegie Hall, Lincoln Center, San Francisco Jazz, the Minnesota Orchestra and The Library of Congress.

She will be accompanied by her band.

ABOUT McCARTER THEATRE CENTER
Thanks to the efforts of Special Programming Director William W. Lockwood, McCarter Theatre Center is a premier presenter of artists renowned around the world and across genres as varied as dance, classical, pop, jazz, performance art, comedy, magic, children’s theatre, and more.
McCarter is supported by the New Jersey State Council on the Arts, Princeton University, and over 2,000 individuals, corporations, community leaders, and foundations.