Wishes, The Witch, The Woods, and A Work of Heart! 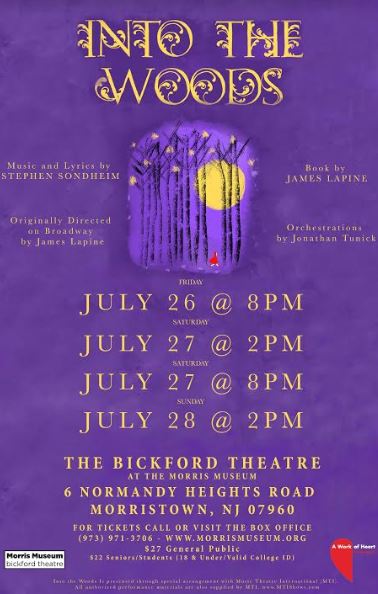 Wishes, The Witch, and The Woods collide in James Lapine and Stephen Sondheim's beloved Tony Award-winning musical. “Be careful what you wish for” seems to be the ongoing theme in this timeless, yet relevant, piece...a rare modern classic. In the Brothers Grimm-inspired musical, when the Baker and his wife learn that they cannot have a child because of a Witch's curse, the two set off on a journey to break the curse, among the wishes of Cinderella, Jack-and-the-beanstalk, Little Red Riding Hood and the Witch herself. Everyone's wish is granted, but sacrifices must be made due to the consequences of their actions as the community comes together to save each other and their kingdom.

“We’re thrilled to be at the Morris Museum’s Bickford Theatre for an exhilarating summer production. Into the Woods is everyone’s favorite musical because it intertwines the stories we have all known and loved for generations,” says Angelo De Fazio, Woods director.

Make sure you use our official production hashtag: #HeartOfTheWoods.

A Work of Heart Productions (WHP) was founded in 2014 by Nicole Lippey. The company consists of professional New York City performers, and produces shows, musicals in concert, and a monthly cabaret series at the famed Feinstein's/54 Below, The Triad Theater, The Metropolitan Room, and more. WHP also offers a summer community Main Stage production, and a year-round educational program for teens and college students, Bringing Broadway Home (BBH). BBH operates in 5-6 week workshops with established professionals in the performing arts industry as Artist-Mentors to our students, alongside Master Teachers and Artistic Directors Nicole Lippey and Angelo De Fazio and Master Teacher and Music Director Susan Braden. Our roster of Artist-Mentors includes Sean Green, Jr. (Hamilton on Broadway), Erin Dilly (Broadway Legend and Tony Nominee), Hilary Maiberger (Belle, International Tour of Beauty and the Beast), Katie Travis (Christine Daae, Broadway and National Tour of Phantom of the Opera), and more!