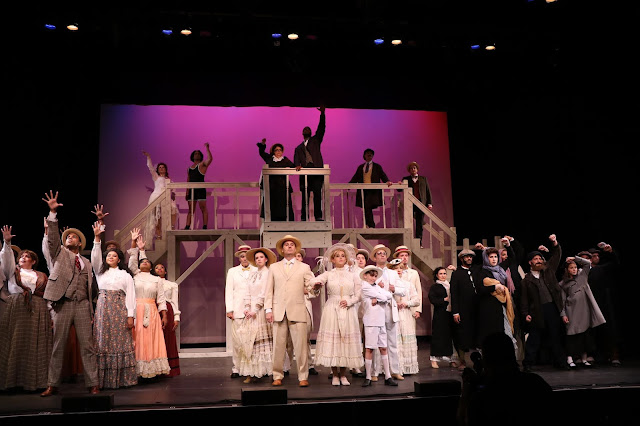 Like wine, the flavors, aromas, and colors of Broadway musicals can change according to age and the cultural “weather,” often rendering them undrinkable or enhancing their taste and color so they surpass their origins.

Such is the case of Ragtime: The Musical, with book by Terrence McNally, lyrics by Lynn Ahrens and music by Stephen Flaherty, the current summer offering of the Light Opera of New Jersey at the South Orange Performing Arts Center through July 28.

Based on E.L. Doctorow’s 1975 novel, Ragtime opened on Broadway in 1998 to mixed reviews, and while it led that year’s Tony Awards with 13 nominations, it lost to The Lion King as Best Musical. Its lavish, $10 million production budget, along with a large cast and orchestra, affected the show’s bottom line. Since then, however, the show has been produced internationally (in London and Norway), revived on Broadway (2009), presented in concert at Lincoln Center and Ellis Island, and performed regionally all over the United States.

Despite the show’s being derided as “nostalgia for a bygone time,” LONJ’s elegant, deeply affecting Ragtime speaks volumes to an age when “woke” is both an adjective and a verb. Its treatment of gender equality, racial tension and biases against immigrants continue to resonate today, reminding us that the problems of 1906 have never really gone away. 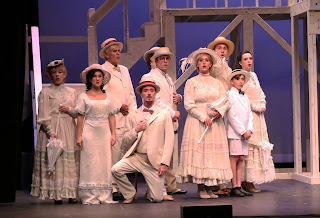 Set in the first decade of the 20th century, Ragtime: The Musical interweaves three distinctly American stories: that of Mother, a stifled white, upper class wife; Tateh, a Jewish immigrant from Latvia determined to succeed in “Amerike”; and Coalhouse Walker, Jr., a talented and daring young black pianist who refuses to be held back by bigotry. All courageously break the chains of their respective social classes and exhibit a hope for a better future. Along the way, their trajectories cross, bringing happiness and tragedy in equal measure. 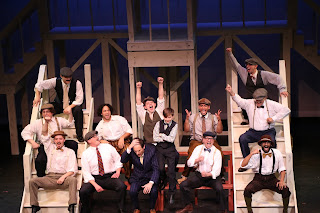 Once again, Jeffrey Fiorello shows off his masterful directorial talent, melding a cast of 35 into a true ensemble; moving them smoothly on, off and around Brandon Frumolt’s very versatile, yet spare, set (made up of various platforms and a pair of rolling staircases) through 18 different scenes; and getting his principal actors to express emotions and advance the story mostly through music supplemented by brief interludes of narration and dialogue. Robert Cruz’s sound, Mark Reilly’s lighting and Laura Iocometta’s props (there’s even a moving Model T Ford!) further enhance the production’s magnificence. And Mike Patierno’s beautiful costumes enable the large ensemble to assume a myriad of roles and telegraph the social status of the actors in the blink of an eye. (Above, right: a baseball game) 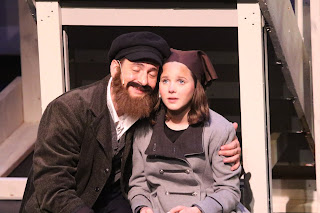 Standouts include an incandescent as Christina Ryan Mother, the New Rochelle housewife who takes charge of her life when her husband accompanies Admiral Peary to the North Pole. It is amazing to watch her metamorphosis from “one who stays put” to a woman with a mission. Anthony Crouchelli is terrific as Mother’s Younger Brother; he too undergoes a transformation: from louche playboy to anarchist. With a strong voice and great stage presence, he commands our attention whenever he appears. 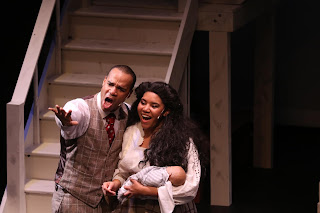 Dante Sterling’s suave, cool Coalhouse Walker Jr. is charming and sympathetic, and Amber Brown as Sarah (right) is heartbreakingly beautiful and vulnerable. As Tateh (above, left, with Grace Lustig), the Russian silhouette artist turned film director, Daniel Peter Vissers captures the immigrant’s optimism tinged with fear he won’t be able to provide for his child; his dignity in the face of abject poverty is palpable. Susan Speidel’s Emma Goldman is full of white-hot zeal, and Colleen Renee Lis (below, left) captures the charming silliness of Evelyn Nesbit, “The Girl in the Swing” and a real media darling of the period. Keith White’s Father is appropriately clueless about the changes in the world around him, and Justin Roth is adorable as his Little Boy. 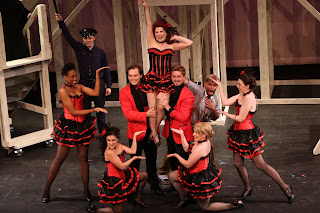 The 18-member ensemble plays multiple roles, provides terrific vocal accompaniment and performs Aimee Sukel Mitacchion’s complex and evocative choreography with agility, energy and grace. Her having the three groups—white family, immigrants and blacks—circle is masterful. The 18 musicians led by Charles Santoro get the syncopation of ragtime music just right to provide a tuneful through line while complementing the actor/singers’ beautiful voices. 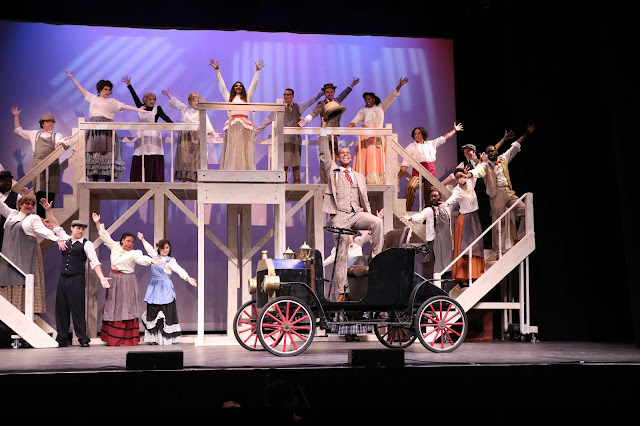 This musical pageantry envelops the audience in the very essence of American musical theater, while the lyrics and plot line strike a resonant chord in our social and cultural consciences. America in 1906 faced changes similar those of 2019: technological advancements (automobile, telephone), an influx of immigrants that threatened to change the tenor of American life, and the advancements sought and made by people of color that many white folks found unsettling.

In the 20 years I have been reviewing productions by the Light Opera of New Jersey, the troupe has never disappointed me. Their production of Ragtime: The Musical is the finest theatrical production I have seen all year. So, take your entire family—from teens to seniors—over to SOPAC to catch it before it closes next weekend. With its painless history lesson of a time of change that is, in so many ways, a harbinger of 2019, you will have much to think and talk about on the ride home and for days afterward. LONJ’S Ragtime is a must-see!

Ragtime: The Musical will be performed at the South Orange Performing Arts Center, One SOPAC Way, South Orange (behind the train station) through Sunday, July 28, Fridays & Saturdays at 8 PM and Sundays at 2 PM. Parking is free, and there are lots of restaurants in the area for pre-theater dining. For information and tickets, visit www.lightoperaofnewjersey.org online or call the SOPAC box office at 973.313.2787.