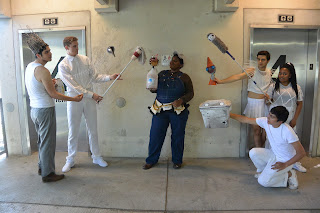 When Princeton University graduate and Yale MFA candidate Maeli Goren was rereading A Midsummer Night’s Dream earlier this year, a piece of text stood out to her that never had before: a speech by Titania, the queen of the fairies, in which she speaks of “[t]he spring, the summer, / The childing autumn, angry winter change / Their wonted liveries, and the mazèd world, / By their increase, now knows not which is which”—in other words, a world plunged into chaos by a changing climate. Suddenly, one of Shakespeare’s most-produced plays had become unusually timely.

After years of seeing productions set in “idyllic forests,” Goren became interested in exploring what might happen to the play if “the creatures of the forests, whether human or fairy, in their own squabbles amongst each other and their own disagreements and their. . .self-serving behavior may have caused the environment to. . .dump over itself.”

For Goren, Princeton Summer Theater was an exciting place to find out. Midsummer will be her third mainstage production with the company (she previously directed The Children’s Hour in 2018 and Metamorphoses in 2015), and it has given her the opportunity to continue her collaborations with many PST stalwarts, including Ross Baron, Maeve Brady and Allison Spann. 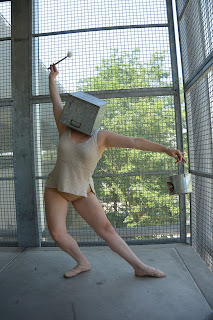 So, what does a Midsummer with an emphasis on environmental themes look like? Well, just like Athenian maiden Helena to the newly-enchanted Lysander and Demetrius, it appears both exactly the same and indelibly altered. The play’s witty humor is given new urgency by the crisis brewing in the background, with an assist from a talented production team; puppets by designer Toria Sterling re-energize the plot’s misbegotten affections, costumes by Jules Peiperl use plastic and other unconventional materials to consider the effect of humans on the environment, original music by cast member Allison Spann gives the piece a rhythmic heartbeat, and an innovative scenic design by Jeff Van Velsor puts the audience onstage for PST’s first-ever production in the round.

In the words of costume designer Jules Peiperl, it’s a “strange, fantastical, punchy, Where the Wild Things Are, Wizard of Oz. . .Midsummer” that, at just 75 minutes, is a spectacular end (or beginning!) to an evening of summer fun in Princeton.

The company will also continue performances of Puck’s Midsummer Mischief, an original children’s play based on the events and characters of A Midsummer Night’s Dream, on Fridays and Saturdays at 11 am through August 3rd on the Hamilton Murray stage.