The Hudson Shakespeare Company returns with the second and final installment of its 28th summer Shakespeare touring season with a unique spin on the little-done play. 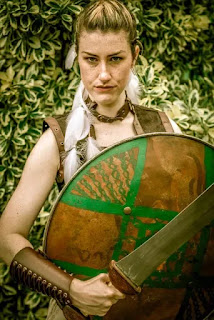 The production is touring to the following libraries and parks throughout northern New Jersey:

ADMISSION: All of the above shows are free to the public. 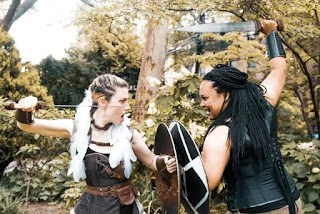 Patrons are encouraged to bring lawn chairs and blankets for any outdoor shows as available seating is limited.

Shakespeare’s exploration of military honor, corrupt politics and complicated family relations are shifted from a traditional Roman setting to an ancient, fantasy world with an all-female cast. Based on the semi-legendary, semi-historical figure of Caius Marcius Coriolanus, this is not yet the Rome of Julius Caesar but tells a hard bitten tale of centuries before the classical republic and eventual empire. A country still working itself out.

Director Noelle Fair showcases an Amazonian world taking many influences from both historical (women-warrior society of ancient Eastern Europe) and fantasy sources (Wonder Woman, Game of Thrones), underscoring it with a percussive and female driven soundtrack.

Maricus (Abby Albrecht) is a career soldier fiercely driven by duty to her country, her wife Virgilia (Norah Hogan) and family but has a vast contempt for the common people. The Plebeians, in her view, are beneath her as they won’t defend and shed blood for their country, but they bask in the security she and the other soldiers provide. Word soon comes that Aufidius (Alexandra Taylor, left), a general in the hostile, neighboring city-state of Volsce and Marcius’ long-time enemy, is mounting a military campaign. Marcius, along with her fellow generals Cominius (Ziggy Schulting) and Titus (Emmy Kuperschmid), meet the threat in the Volsce city of Corioli. At Corioli, the Romans are overrun until Marcius single-handedly breaks through the enemy’s forces and humiliates Aufidius in one-on-one combat.

The troops return triumphantly to Rome and having won a decisive victory in Corioli, Marcius is granted the honorary name of Coriolanus to commemorate the victory. However, what Marcius sees as her simple duty, her mother Volumnia (Maggie Schweppe) and her mentor Menenius (Amanda Cook) see as an opportunity for political advancement. The office of Consul, similar to the Secretary of Defense, is up for election but Marcius must get the vote of the very people who she hates and who hate her. Complicating matters, the city’s Plebian representatives, the cunning Tribune Sicinius (Mia Christinis) and the blunt Tribune Brutus (Klara Gribetz) openly plot to thwart Marcius’ nomination.

Receiving pressure from her overbearing mother and allies, Marcius reluctantly seeks the office and is elected. Sicinius and Brutus later sow discontent amongst the same populace with news of Marcius’ true feelings about them leading to a riot and her eventual banishment. However, the political victory of Sicinius and Brutus is short-lived as Marcius goes to the home of her enemy Aufidius and raises an army to destroy Rome.

Will they succeed in their military invasion or will more subtle and familiar forces stop the vengeful Coriolanus?

Written in 1606, Coriolanus marks the end of Shakespeare’s high tragedies of Macbeth and King Lear before moving on to more hopeful redemption stories of Pericles and The Winter’s Tale.