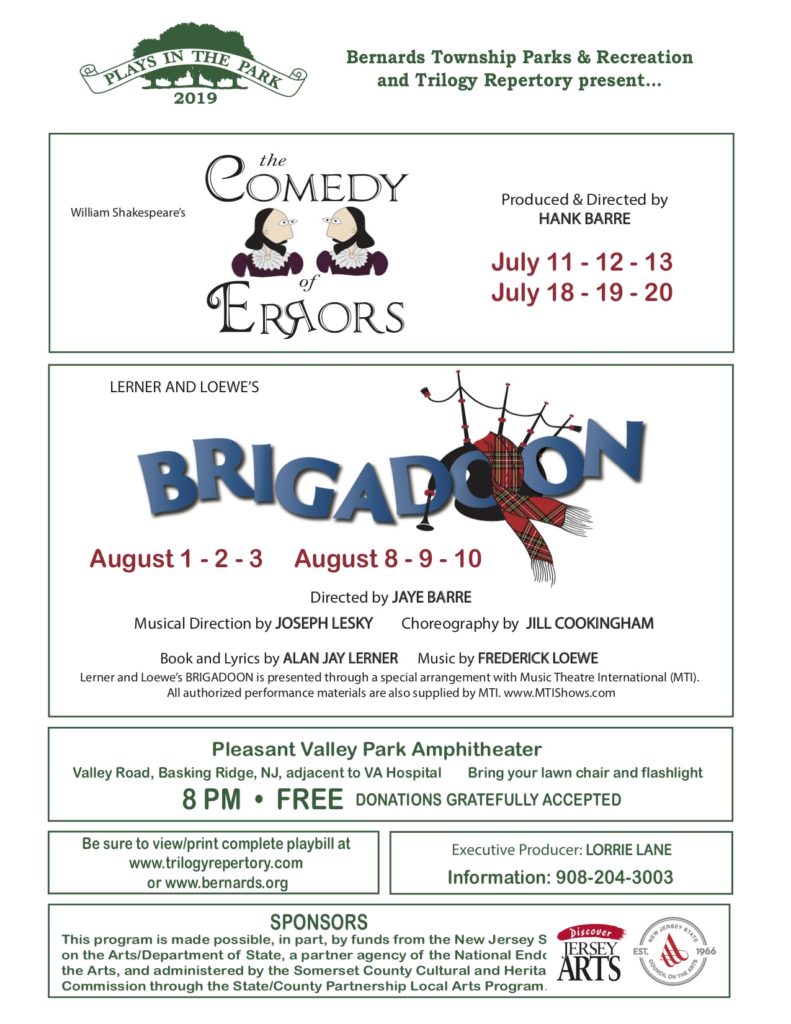 The Comedy of Errors
by William Shakespeare
directed by Hank Barre

WHEN: July 11, 12, and 13, and July 18, 19, and 20, at 8 PM each evening
WHERE: outdoor amphitheater at Pleasant Valley Park, Valley Road, in Basking Ridge
ADMISSION: The shows are free to the public, and patrons are encouraged to bring a lawn chair, blanket,  and a flashlight, and enjoy a night of theater under the stars. Donations to support this program, sponsored by the Bernards Township Department of Recreation, are gratefully accepted.

This prize-winning series has been running for more than 35 years.

The Comedy of Errors is a rollicking farce, a nonstop series of hilarious mistaken identities when two sets of identical twins and their parents, who were all separated at birth, show up at the same time in the same place years later.

Director Hank Barre says, “This play is not Hamlet or Macbeth with a message but is just plain fun.”

With the recent advent of women playing traditionally male roles, such as Glenda Jackson on Broadway as King Lear, Trilogy Repertory has cast the show without regard to the sex of the actors. The four main male characters are all played by women as are some of the minor roles. In Shakespeare’s time, women’s roles were played by young men so for this production Trilogy has reversed the tradition.

This offering will be followed on August 1, 2, and 3 and 8, 9, and 10 by a presentation of the delightful musical Brigadoon on the park stage.

For further information call 908 204-3003 or go to the Trilogy Repertory website at www.trilogyrepertory.com.